Firm answers about what caused the crash could take months. 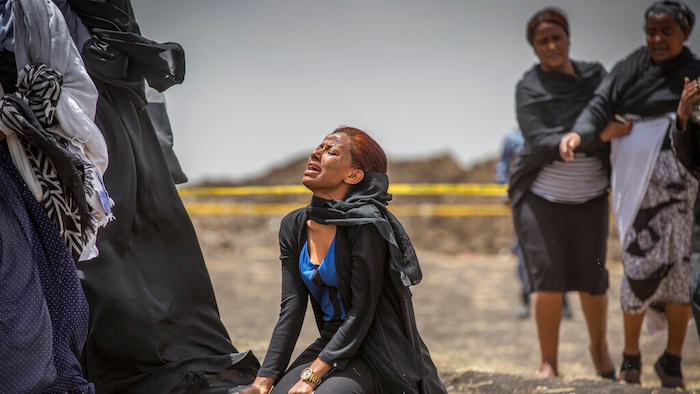 Ethiopian relatives of crash victims mourn and grieve at the scene where the Ethiopian Airlines Boeing 737 Max 8 crashed shortly after takeoff on Sunday killing all 157 on board, near Bishoftu, south-east of Addis Ababa, in Ethiopia Thursday, March 14, 2019. The French air accident investigation authority said Thursday that it will handle the analysis of the black boxes retrieved from the crash site and they have already arrived in France but gave no time frame on how long the analysis could take.
AP Photo/Mulugeta Ayene

HEJERE, Ethiopia (AP) — Flight recorders from a doomed Ethiopian Airlines flight arrived in France for analysis Thursday as frustrated relatives of the 157 people killed stormed out of a meeting with airline officials in Addis Ababa.

Sunday's crash was the second fatal flight for a Boeing 737 Max 8 in less than six months. More than 40 countries, including the U.S., have now grounded the planes or refused to let them into their airspace.

After holding out for several days, the U.S. Federal Aviation Administration issued an emergency order grounding the planes Wednesday, saying they had new satellite data and evidence that showed the movements of the Ethiopian Airlines Flight 302 were similar to those of Lion Air Flight 610. That flight crashed into the Java Sea off Indonesia in October, killing 189 people.

Officials at Lion Air have said sensors on their plane produced erroneous information on its last four flights, triggering an automatic nose-down command that the pilots were unable to overcome on its final voyage.

Ethiopian Airlines CEO Tewolde Gebremariam said its pilots had received special training on how to deal with that problem.

"In addition to the basic trainings given for 737 aircraft types, an additional training was given for the Max version," Tewolde said. "After the Lion Air crash, questions were raised, so Boeing sent further instructions that it said pilots should know."

Tewolde said he is confident the investigation will reveal that the crash is not related to the safety record of Ethiopian Airlines, widely seen as the best-managed in Africa.

Firm answers about what caused the crash could take months. The French air accident investigation authority, known by its French acronym BEA, said Thursday it will handle the analysis of the flight recorders, often referred to as a plane's black boxes, retrieved from the crash site.

The BEA has experience with global air crashes, and its expertise is often sought whenever an Airbus plane crashes because the manufacturer is based in France. A BEA official told The Associated Press that the recorders have already arrived in France but gave no time frame on how long the analysis could take.

In Addis Ababa, about 200 angry family members of crash victims left a briefing with Ethiopian Airlines officials, saying that the carrier has not given them adequate information. Officials said they have opened a call-in center that is open 18 hours a day to respond to questions, but family members said they are not getting the answers they need. People from 35 countries died.

At the crash scene in Hejere, about 50 kilometers (31 miles) from Addis Ababa, growing numbers of family members arrived, some wailing or beating their chests as a bulldozer navigated piles of debris. Blue plastic sheeting covered the wreckage of the plane.

Moshi Biton, brother of Israeli victim Shimon Daniely Reem-Biton, asked Ethiopia's prime minister to allow Israeli investigators to help recover remains. Two Israelis were killed in the crash and members of an emergency response team from the country said they are frustrated because they have not been able to access the crash site.

"Big families, a lot of people and the full Israeli nation is waiting for these remains and we will not go out of Ethiopia until we find the remains to bury them," Biton said. "Because if not, they will stay missing for the rest of the life and we cannot do that in our religion."

The 737 Max was supposed to boost Boeing's fortunes for years to come, but the groundings will have a far-reaching financial impact, at least in the short term, said John Cox, a veteran pilot and CEO of Safety Operating Systems. Boeing shares have dropped nearly 11 percent since the crash, but are still up 17 percent overall in 2019.

In addition to the planes that have been grounded, there are more than 4,600 Boeing 737 Max 8 planes on backlog. There are about 370 Max jets in circulation.

"There are delivery dates that aren't being met, there's usage of the aircraft that's not being met, and all the supply chain things that Boeing so carefully crafted," Cox said. "If they can't deliver the airplanes, where do they put the extra engines and the extra fuselage and the extra electrical components?"

Impacted airlines also may come knocking on Boeing's door claiming damages. Norwegian Airlines said it would pursue reimbursement from Boeing for lost business and if other carriers follow suit, that could be costly. Whether airlines would be successful with such claims depends on the details of the contracts those carriers have with Boeing, said Dan Rose, partner at Kreindler & Kreindler, an aviation law firm.

"One way or another, whether there's a contractual provision that covers it or not, there are almost certainly going to be claims made against them," Rose said.

The FAA was under intense pressure to ground the planes and resisted even after Canada relented on Wednesday and agreed to bar the Max from the air.

The agency, which prides itself on making data-driven decisions, had maintained there was nothing to show the Boeing jets were unsafe, and flights continued.

But President Donald Trump, who announced the grounding, was briefed that same day on new developments by acting FAA administrator Daniel Elwell and Transportation Secretary Elaine Chao, and they determined the planes should be grounded, the White House said. Trump spoke afterward with Boeing CEO Dennis Muilenberg and Boeing signed on.

Asked on NBC's "Today" show Thursday whether there was evidence the Lion Air and Ethiopian Airlines flights were brought down by the same cause, Elwell said: "We are much closer to that possibility, and that's why we grounded the airplanes. We got new information yesterday, and we acted on it. It is in our minds now a link that is close enough to ground the airplanes."

Boeing issued a statement saying it supported the FAA's decision even though it "continues to have full confidence" in the planes' safety.

The company also said it had recommended the suspension of the Max fleet after consultations with the government.

U.S. airlines, mainly Southwest, American and United, should be able to swap out planes pretty quickly, and passengers shouldn't be terribly inconvenienced, said Paul Hudson, president of flyersrights.org, which represents passengers. The Max, he said, makes up only a small percentage of the U.S. passenger jet fleet.

"I think any disruptions will be very minor," he said.

Major disruptions have not been reported in other countries where the Max has been grounded.