Electric Jaguar Wins Car of the Year in Europe

The small SUV with coupe lines edged out the Alpine A110 sports car. 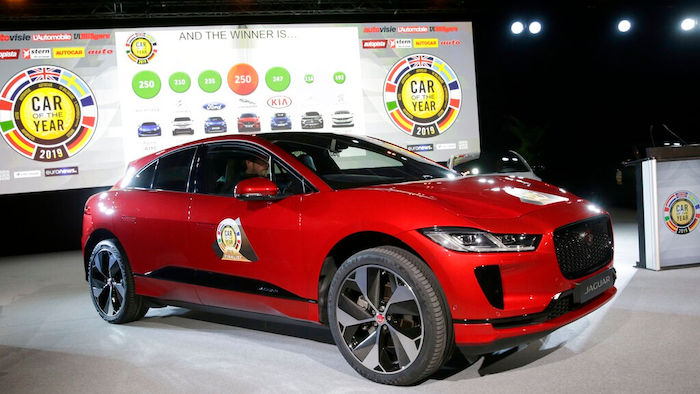 The Jaguar I-Pace model was elected "Car of the Year 2019", ahead of the 89th Geneva International Motor Show, at the Palexpo, in Geneva, Switzerland, on Monday, March 4, 2019.
Salvatore di Nolfi/Keystone via AP

GENEVA (AP) — The electric Jaguar I-Pace won the Car of the Year award in Europe on Monday, the first time the storied British brand has been bestowed the prize just as Brexit looms over the continent's auto industry.

The small SUV with coupe lines edged out the Alpine A110 sports car, which is not a mass production vehicle, after they tied for top honors in a first round of voting by dozens of automotive journalists. The Jaguar won a runoff.

Jaguar design director Ian Callum said the automaker, now owned by India's Tata Motors, sees electric as the future. He touted the new platform for the I-Pace and said the car showed how Jaguar can innovate.

The award established in 1964 marks the unofficial start of the Geneva auto show. The prize, which can propel sales, is organized by seven European magazines and awarded by 60 journalists from nearly two dozen countries.

"I think jury members are quite excited about having a luxury SUV, electric vehicle with a sporty look," said jury president Frank Janssen of the German weekly Stern. "It's the first electric vehicle from a European premium manufacturer that can take up with Tesla."

The finalists were winnowed down from an initial list of 60 models, and road tests began in October. Final tests were two weeks ago at a test center outside Paris.

Last year's winner was the Volvo XC40, a compact SUV.