The ExoMars mission is designed to search for evidence of life on Mars.

Associated Press
ESA’s ExoMars rover (foreground) and Russia’s stationary surface science platform (background) are scheduled for launch in July 2020, arriving at Mars in March 2021. The Trace Gas Orbiter, which has been at Mars since October 2016, will act as a relay station for the mission, as well as conducting its own science mission.
ESA/ATG Medialab

LONDON (AP) — The British-built Mars rover that is scheduled to be launched in 2020 has been named after scientist Rosalind Franklin.

The ExoMars mission is designed to search for evidence of life on Mars.

The name was revealed Thursday by astronaut Tim Peake and science minister Chris Skidmore after more than 36,000 people submitted ideas, which were narrowed down by a panel of experts.

Franklin was an English scientist best known for groundbreaking work on the molecular structure of DNA.

Peake called her "one of the great British scientists who unlocked the secrets of human life in terms of understanding DNA."

The mission is a joint project between the European and Russian space agencies. 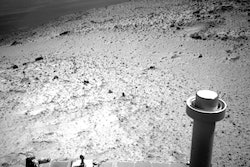