The Chinese manufacturer is expanding into new and growing markets despite Western warnings the company might be a security risk. 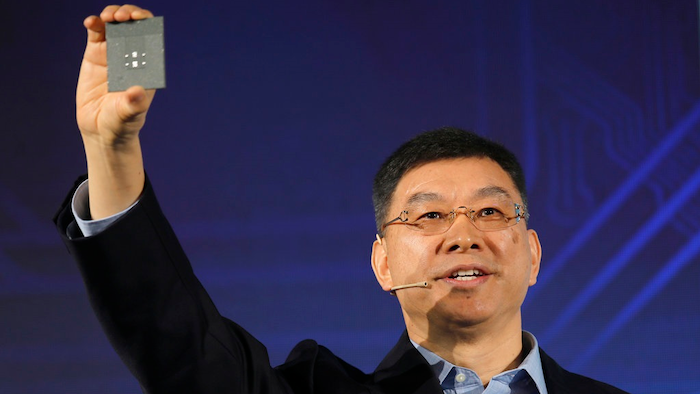 William Xu, director, chief strategy marketing officer, chairman of the Investment Review Board of Huawei, displays a processor chip during an unveiling ceremony in Shenzhen, China, Monday, Jan. 7, 2019. Chinese telecom giant Huawei unveiled a processor chip for data centers and cloud computing as it expands into an emerging global market despite Western warnings the company might be a security risk.
AP Photo/Vincent Yu

BEIJING (AP) — Huawei Technologies Ltd. showed off a new processor chip for data centers and cloud computing Monday, expanding into new and growing markets despite Western warnings the company might be a security risk.

Huawei and other Chinese technology companies that rely on Western technology are stepping up efforts to develop their own.

The company based in southern China's Shenzhen has pushed ahead with commercial initiatives despite the Dec. 1 arrest of its chief financial officer, Meng Wanzhou, the daughter of Huawei founder Ren Zhengfei, in Canada on U.S. charges related to possible violations of trade sanctions on Iran.

Huawei said the Kunpeng 920 chip is designed for servers that handle a flood of data from smartphones, video and other network services — a fast growing sector with the development of artificial intelligence and the "internet of things." The company said it is part of a planned product lineup to support "intelligent computing."

Huawei, founded in 1987 by a former military engineer, is China's first global tech competitor and a national champion at the head of an industry the ruling Communist Party is eager to promote. The company says it is employee-owned and rejects accusations by Washington and some other governments that it is controlled by the ruling party and might facilitate spying.

Chinese and U.S. envoys met Monday for talks over a tariff war triggered by American complaints about Beijing's technology policies.

The Trump administration, Europe and other trading partners complain initiatives such as "Made in China 2025," which calls for state-led creation of Chinese global champions in robotics and other fields, violates Beijing's market-opening obligations. American officials worry they might erode U.S. industrial leadership.

The company says its 2018 global sales are forecast to top $100 billion despite curbs imposed on use of its technology by the United States, Australia, Japan and some other governments.

Huawei, headquartered in the southern city of Shenzhen, has steadily expanded into new industry segments. Its smartphone brand, launched in 2010, passed Apple to become the global No. 2 seller behind Samsung in the third quarter of 2017, according to IDC. The company has developed the Kirin line of chips for its phones and Ascend chips for artificial intelligence.

The Kunpeng 920 chip is based on the ARM system used increasingly in smartphones and distributed computing. It competes in some settings with the x86 standard used by traditional industry leaders Intel Corp. and Advanced Micro Devices Inc.

Also Monday, Huawei unveiled three servers based on the new chip that are intended for global sale.

"Where we see the biggest value for the Kunpeng 920 is in data centers, servers and big data," William Xu, Huawei's chief strategy marketing officer and a member of the company board, said at a news conference in Shenzhen.

Huawei has China's biggest corporate research and development budget at $13 billion in 2017.

Those investments have helped to reduce Huawei's reliance on Western technology but its servers, smartphones and other products still use billions of dollars' worth of U.S., European, Japanese and other chipsets and other technology.

Executives at Monday's event avoided replying directly when asked whether American security warnings might hurt sales or about concerns U.S.-Chinese rivalry in technology might split the world into separate spheres with their own incompatible standards.

Xu responded to a question about possible industry fragmentation by saying the outlook for the server market is "very bright." The general manager of Huawei's server business, Redfox Qiu, added later, "in any country or region that we operate, we run our business in strict compliance with local laws and regulations."

Global shipments of Huawei servers grew to 980,000 last year, a twelve-fold increase over 2012, according to Qiu.

Xu tried to play down suggestions the Kunpeng 920 might compete directly with Intel, a major supplier to Huawei.

"Intel will remain our most important strategic partner," said Xu. The Kunpeng 920 is "definitely not a replacement for Intel processors."