The foreign Army veteran was stunned when he heard his recently repaired shoulder squeak.

Andrew W. Lehren & Emily Siegel
Wolfgang Neszpor, after years in the military and playing rugby, was used to his battered body making noises, but the 36-year-old was stunned when he heard his recently repaired shoulder squeak.
Cheryl Goodenough, Redland City Bulletin

"You could really hear it," he said.

He recalled when the surgeon examined him and lifted up his arm, "It was a stupid amount of pain." Two months earlier, Neszpor, 36, had gotten a new shoulder joint, a PyroTITAN made by Integra LifeSciences of New Jersey.

Neszpor lives in Australia, where his operation was performed. He believed the Made in the USA label meant he would be fixed with state-of-the-art technology.

What he did not know is that even though it was made in the USA, the U.S. Food and Drug Administration has not deemed it good enough for Americans. The agency permitted overseas sales under an obscure provision for registering "export only" devices, requiring far less scrutiny than for devices sold domestically.

The PyroTITAN is one of more than a dozen export-only devices with troubled track records identified by NBC News. One implant for losing weight led instead to emergency surgeries. There were US-made stents that could cut into arteries they were supposed to save, and insulin pumps that suddenly stopped delivering needed insulin. The FDA believed one company's heart valves may have caused a five-year-old child to die.

For U.S. companies, exporting medical devices is big business, valued last year at more than $41 billion. About 4,600 devices are registered with the FDA as "export only" devices.

Several medical device executives said registering the devices is faster, less expensive and has involved less oversight than getting them approved for sale inside the U.S.

The troubled devices identified by NBC News have been sold around the world. The destinations range from the Netherlands to Namibia, Chile to Canada, Japan to Germany.

There may be more that have gone wrong. NBC News found these by analyzing and comparing databases in 10 countries, and a lack of international standards for identifying devices means it is difficult to know how many other troubled devices exist.

"Is an American life worth more than a British life or an Australian life?" said Dr. Sidney M. Wolfe, who helped establish the consumer health organization Public Citizen. "I mean that's the reason they're not being approved here, is because you're protecting an American life. So why would it be okay for another country?"

The FDA says its oversight is limited. "The FDA does not have the authority to take action on export-only devices marketed in other countries simply because they do not meet the agency's requirements for marketing in the United States," the agency told NBC News.

The PyroTITAN had documented problems before it was embedded into Neszpor's shoulder. The company had alerted the medical community in 2012 that some could break. After his surgery, more flaws emerged, including breaks and bone burns. At least 19 patients needed to have the PyroTITAN removed. Neszpor is one of them.

While Australians could get the PyroTITAN in the nation's general medical market, Neszpor's doctor encouraged him to enter a clinical trial.

After his surgery and in pain, Neszpor turned to Dr. Desmond Soares.

"As we opened the shoulder implant, you could see some black powdery stuff," the doctor recalled. He spotted a crack in the device. "Underneath in the bone, there were black powdery fragments, which is obviously the disintegrating carbon from the PyroTITAN implant."

Several experts, including Wolfe, said this underscores a flaw in the U.S. export-only process, because regulators in many countries do not conduct their own rigorous evaluations.

Australian surgeon Dr. Philip Duke, who was one of several doctors in the PyroTITAN trials, defended the clinical trials.

"I strive to ensure that the research is conducted in full compliance with all applicable regulations and medical ethics guidelines, and with the full disclosure of any known risks to trial participants," he said.

Integra LifeSciences later suspended the two clinical trials for the device. The device never lost approval for sale in the Australian and European general markets.

"Today, the PyroTITAN device meets all regulatory, safety and performance requirements," the company wrote in a statement to NBC News, and "has enabled many patients to regain the mobility of their shoulders."

The company said it monitors safety and noted that Australian government data shows it is "comparable" to rivals when tabulating revision surgeries.

A new clinical trial is underway and the company may afterward seek FDA approval for domestic sales.

Nezspor looks back on a life he believes was diminished by the PyroTITAN.

"I thought I was really going to get something out of it," said Nezspor, the father of six children. "You sit here and mull over it. You feel like less of a person because you can't get involved in your kids' lives and you can't do the things that you want to do."

When Congress, in bipartisan legislation, created the framework in 1996 for registering "export only" devices, proponents argued FDA oversight should be minimal.

A decade later, Shelhigh Inc. of New Jersey, challenged that in court.

Shelhigh sued in federal court, contending the agency did not have the right to judge its manufacturing since the devices were destined for a foreign market. Regulators in Spain and Italy deemed Shelhigh's products good enough, it reasoned, so the FDA should not second-guess those decisions.

The judge sided with the FDA. Shelhigh is out of business. Lea Gabbay, who was a company executive, disagreed with the FDA's portrayal of the firm. The adverse events were "never, never device-related," she contended. "The product was very much in demand and it was saving lives."

This article was provided by NBC News, a partner in the Implant Files, a global investigation of the medical device industry. To read a full version of this story go to: https://www.nbcnews.com/health/health-care/exporting-pain-u-s-made-medical-devices-cause-serious-injuries-n939121 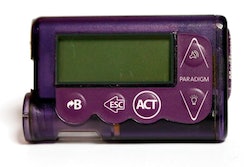