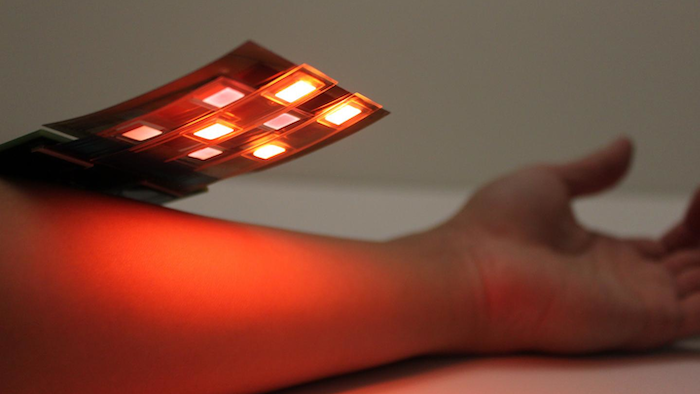 A new sensor made of an alternating array of printed light-emitting diodes and photodetectors can detect blood-oxygen levels anywhere in the body. The sensor shines red and infrared light into the skin and detects the ratio of light that is reflected back.
Yasser Khan, Arias Research Group, UC Berkeley

A new flexible sensor developed by engineers at the University of California, Berkeley, can map blood-oxygen levels over large areas of skin, tissue and organs, potentially giving doctors a new way to monitor healing wounds in real time.

"When you hear the word oximeter, the name for blood-oxygen sensors, rigid and bulky finger-clip sensors come into your mind," said Yasser Khan, a graduate student in electrical engineering and computer sciences at UC Berkeley. "We wanted to break away from that, and show oximeters can be lightweight, thin and flexible."

The sensor, described this week in the journal Proceedings of the National Academy of Sciences, is made of organic electronics printed on bendable plastic that molds to the contours of the body. Unlike fingertip oximeters, it can detect blood-oxygen levels at nine points in a grid and can be placed anywhere on the skin. It could potentially be used to map oxygenation of skin grafts, or to look through the skin to monitor oxygen levels in transplanted organs, the researchers say.

"All medical applications that use oxygen monitoring could benefit from a wearable sensor," said Ana Claudia Arias, a professor of electrical engineering and computer sciences at UC Berkeley. "Patients with diabetes, respiration diseases and even sleep apnea could use a sensor that could be worn anywhere to monitor blood-oxygen levels 24/7."

Existing oximeters use light-emitting diodes (LEDs) to shine red and near-infrared light through the skin and then detect how much light makes it to the other side. Red, oxygen-rich blood absorbs more infrared light, while darker, oxygen-poor blood absorbs more red light. By looking at the ratio of transmitted light, the sensors can determine how much oxygen is in the blood.

These oximeters only work on areas of the body that are partially transparent, like the fingertips or the earlobes, and can only measure blood-oxygen levels at a single point in the body. 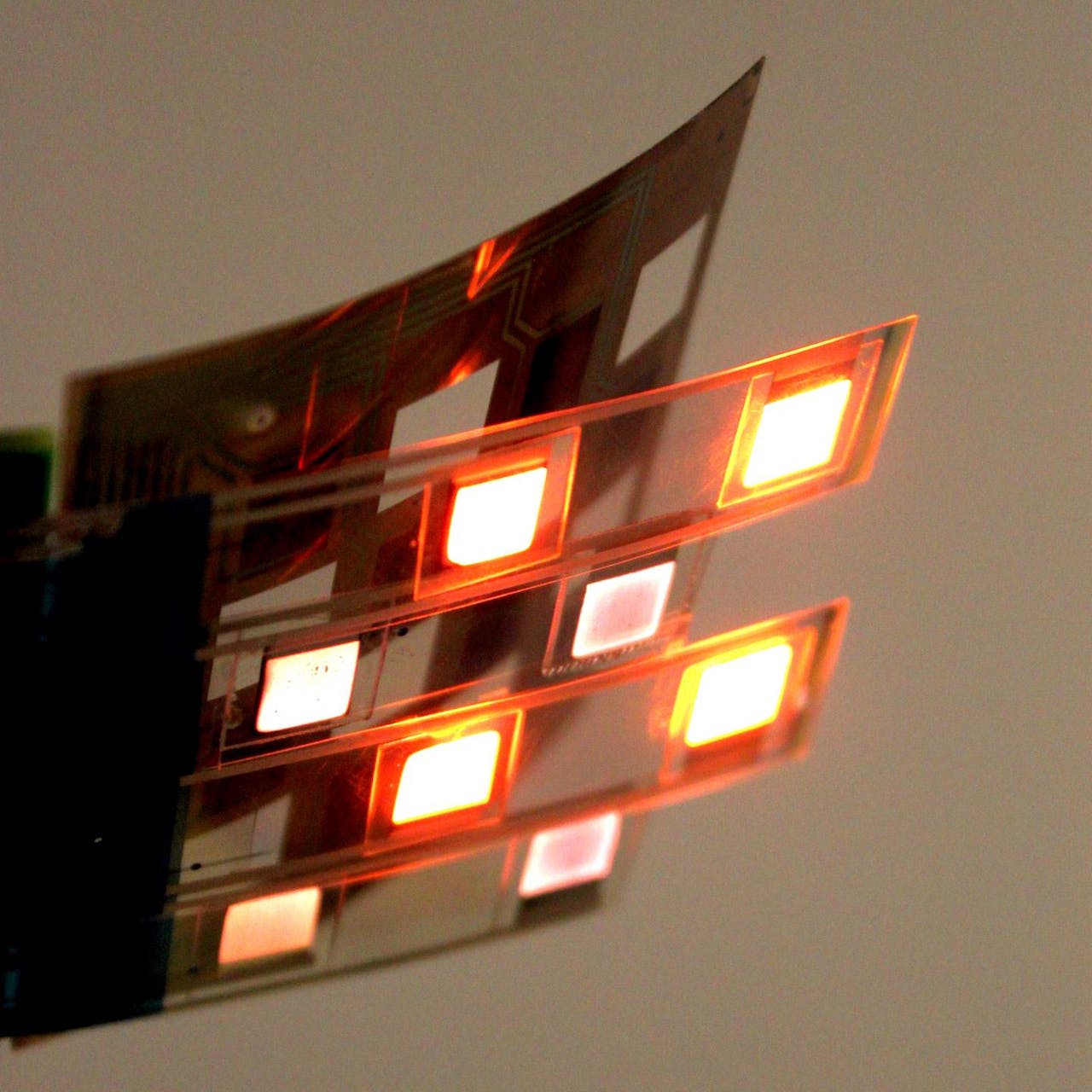 "Thick regions of the body, such as the forehead, arms and legs, barely pass visible or near-infrared light, which makes measuring oxygenation at these locations really challenging," Khan said.

In 2014, Arias and a team of graduate students showed that printed organic LEDs can be used to create thin, flexible oximeters for fingertips or earlobes. Since then, they have pushed their work further, developing a way of measuring oxygenation in tissue using reflected light rather than transmitted light. Combining the two technologies let them create the new wearable sensor that can detect blood-oxygen levels anywhere on the body.

The new sensor is built of an array of alternating red and near-infrared organic LEDs and organic photodiodes printed on a flexible material. The team used the sensor to track the overall blood-oxygen levels on the forehead of a volunteer who breathed air with progressively lower concentrations of oxygen -- similar to going up in altitude -- and found that it matched those using a standard fingertip oximeter. They also used the sensor to map blood-oxygen levels in a three-by-three grid on the forearm of a volunteer wearing a pressure cuff.

"After transplantation, surgeons want to measure that all parts of an organ are getting oxygen," Khan said. "If you have one sensor, you have to move it around to measure oxygenation at different locations. With an array, you can know right away if there is a point that is not healing properly."