It caught fire and exploded as the officer headed out on patrol.

NEW YORK (AP) — The New York City Police Department scrambled Monday to find ways to quickly replace thousands of body camera devices it suddenly stopped using after an officer said one caught fire and exploded as he headed out on patrol over the weekend.

The department shelved about 3,000 of its newest model Vievu LE-5 units, about one-fifth of its body camera inventory. Officers using other models will continue to wear them, the department said.

Deputy Commissioner Jessica Tisch said pulling the LE-5 cameras from use made it unlikely the department would meet its goal of equipping the vast majority of officers with body cameras by the end of the year.

The department started handing out LE-5 cameras in August and was planning to finish rolling them out to officers, sergeants and lieutenants in all patrol, transit and housing units in the coming months.

All of that is on hold while Saturday night's alleged explosion is being investigation. Commissioner James O'Neill said the department has hired an independent forensic investigator to conduct a probe.

"We understand that rolling out the body cameras is a big part of the agency's commitment to building trust with the community," said Tisch, who is in charge of information technology.

"Right now, sorting through all of this and developing a go-forward strategy is our top priority," she added.

The department has settled on two possible solutions: adding more of the older LE-4 model cameras or mixing in a version made by Axon, which acquired Vievu in May.

Both options have drawbacks, Tisch said.

The LE-4 is in short supply and the Axon model uses different software to manage video recordings, she said.

Axon said in a statement it will do whatever is necessary to quickly and safely resolve the situation.

Police said an officer in Staten Island noticed smoke coming from the USB charging port on his LE-5 camera after pulling it off of a charger.

The officer removed it and the device exploded, police said.

No one was injured.

The NYPD said the explosion revealed a potential for the battery to ignite, and the cameras are being removed out of an abundance of caution. 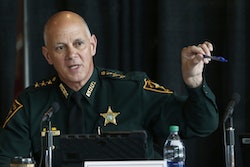