The two rovers, each about the size of a cookie can, are to capture images of the asteroid and measure surface temperatures before a larger rover and a lander are released later. 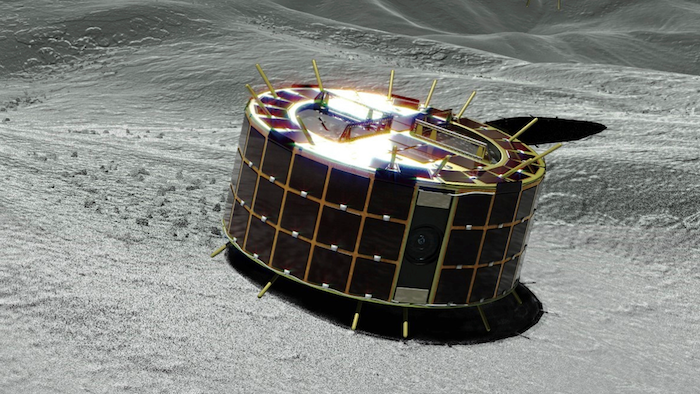 This computer graphic image provided by the Japan Aerospace Exploration Agency (JAXA) shows two drum-shaped and solar-powered Minerva-II-1 rovers on an asteroid. Japanese unmanned spacecraft Hayabusa2 released two small Minerva-II-1 rovers on the asteroid Ryugu on Friday, Sept. 21, 2018, in a research effort that may provide clues to the origin of the solar system. JAXA said confirmation of the rovers' touchdown has to wait until it receives data from them on Saturday.
JAXA via AP

TOKYO (AP) — A Japanese spacecraft released two small rovers on an asteroid on Friday in a mission that could provide clues to the origin of the solar system.

The Japan Space Exploration Agency said the two Minerva-II-1 rovers were lowered from the unmanned spacecraft Hayabusa2 to the asteroid Ryugu. The spacecraft arrived near the asteroid, about 280 million kilometers (170 million miles) from Earth, in June.

JAXA said confirmation of the robots' safe touchdown has to wait until it receives data from them on Saturday.

Hayabusa2 approached as close as 55 meters (180 feet) to the asteroid to lower the rovers, waited for a minute and then rose back to its waiting position about 20 kilometers (12 miles) above the surface. JAXA said the release went successfully.

The solar-powered rovers' voltage plunged as night fell on Ryugu, a sign that they are on the asteroid, said Hayabusa project team spokesman Takashi Kubota.

"We are very hopeful," project manager Yuichi Tsuda said. "I'm excited about seeing the pictures. I want to see the scenery of space seen from Ryugu's surface."

The two rovers, each about the size of a cookie can, are to capture images of the asteroid and measure surface temperatures before a larger rover and a lander are released later. The rovers move by "hopping" up to 15 meters (50 feet) at a time because the extremely weak gravity on the asteroid makes rolling difficult. They can continue jumping as long as their solar panels and power last, JAXA said.

Hayabusa2 is scheduled to attempt three brief touch-and-go landings on the asteroid to collect samples in hopes of providing clues to the origin of the solar system and life on Earth. Since it arrived at Ryugu, scientists have been looking for suitable landing sites on the uneven surface, and its first attempt is expected in October.

The spacecraft is set to release a German-French lander called MASCOT carrying four observation devices in early October and a bigger rover called Minerva-II-2 next year.