Workers disassembling the nearby Tappan Zee Bridge discovered it had destabilized and could fall, potentially hitting the new span. 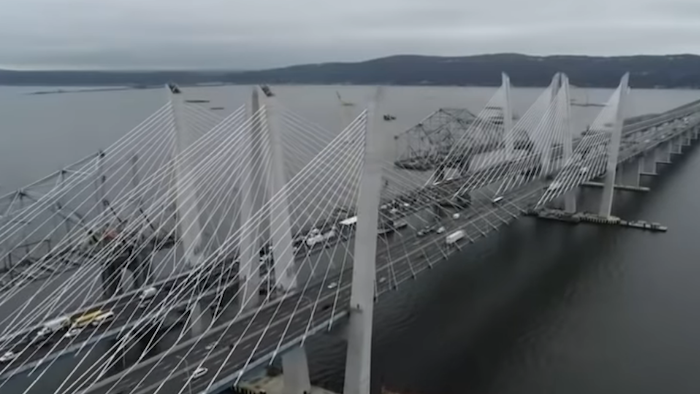 NYACK, N.Y. (AP) — Engineers have recommended to the Thruway Authority that a span of a new bridge named after Gov. Andrew Cuomo's father can open for traffic Tuesday evening, weather permitting.

The second span of the new Mario M. Cuomo Bridge over the Hudson River was supposed to open to traffic on Saturday, but workers disassembling the nearby Tappan Zee Bridge discovered it had destabilized and could fall, potentially hitting the new span.

"While there remains a possibility of the old bridge east span failing, in the event it does, it will fall within a safety zone that does not affect vessel traffic or the structural integrity of the new eastbound bridge," Towle said. "As things now stand, the traffic switch has been scheduled for Tuesday evening, weather permitting."

Cuomo called the timing of the safety issues on the old bridge, arising just before the new span was to open publicly and mere hours after the grand opening ceremony, a "bizarre coincidence." Meanwhile, his opponents in the campaign for New York governor questioned whether the new bridge opening had been accelerated for political reasons in advance of Thursday's upcoming primary election.

"This has nothing to do with the new bridge, zero, it's all about the old bridge," he said at a news conference.

Cuomo's opponent in the Democratic primary, actress Cynthia Nixon, questioned the timing of the bridge's opening in a statement Saturday. "There are real, reasonable questions about whether this bridge span opening was accelerated to aid the governor's campaign," she said.

On Sunday, Republican Marc Molinaro, who will face the Democratic primary winner in the November general election, called for an investigation by the National Transportation Safety Board.