Pictures may be worth a thousand words, but these might be worth a whole lot more. 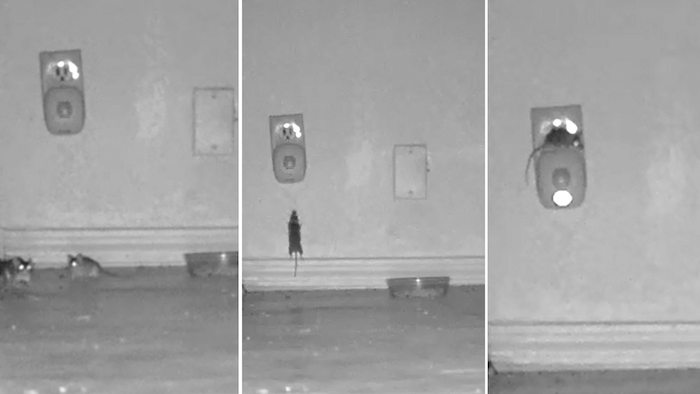 This photo of three images taken from October 2017 video produced by Sierra Research Laboratories shows mice congregated around and climbing on a device that was supposed to scare them away. The images were included in a civil complaint filed with the U.S. Attorney's Office for the Southern District of New York against BHH, the New York based company that produces the device. On Wednesday, Sept. 5, 2018, a New York judge said pictures of mice lounging around the anti-rodent device are reason enough to let a lawsuit proceed against the company that sells them.
Sierra Research Laboratories via AP

NEW YORK (AP) — Pictures of mice lounging around an anti-rodent device designed to make them flee were cited by a judge who let a class-action lawsuit proceed Wednesday against a company that sells and markets them.

"It is often said that a picture is worth a thousand words," U.S. District Judge William H. Pauley III wrote above three pictures depicting mice near and, in one case, resting on top of the device. "And, in this case, three photographs from a study conducted by plaintiffs' expert are worth even more."

Then he noted that lawyers had submitted over 42,000 words to try to convince him how to rule.

"As the photographs show, mice can apparently relax comfortably under a Repeller and even appear to be so drawn in by its siren song that one would scale a wall just to snooze on it," Pauley said, citing a photograph of a mouse, it's tail dangling beneath it, climbing up a wall to the device.

The 2015 lawsuit was filed by women in Palm Desert, California, and Woodville, Texas. They sought unspecified damages and wanted the lawsuit to represent others who had purchased over 2.4 million devices.

They said they bought Bell + Howell Ultrasonic Pest Repellers based on advertising that claimed the devices were "fast and effective" to repel "mice, rats, roaches, spiders, and ants" and "Drive Pests Out."

They sued in Manhattan federal court after concluding the devices, which plug into an electrical outlet, were ineffective, naming as defendants the New York-based BHH, LLC., which does business as Bell + Howell and Van Hauser LLC.

In ruling, Pauley noted that some packaging for the devices includes a disclaimer that says ultrasonic signals will lose intensity as it travels and that it can be absorbed by soft objects such as carpeting and is reflected by hard surfaces such as furniture.

"But whether this disclaimer puts consumers on notice is a jury question," Pauley said. He added that a jury could decide if the devices are completely ineffective and falsely marketed.

Attorney Adam H. McCabe, representing the companies, said Pauley's ruling on the request to dismiss the lawsuit without a trial was disappointing.

"Our client stands by its product and the product's effectiveness," he said. "Numerous scientists and laboratory testing of ultrasonic pest repellers confirm their effectiveness. It's unfortunate that the photo, taken by plaintiffs' paid experts in a staged and unverifiable setting, was included in the Order."

Pauley said the company might have been on notice that ultrasonic repellers were generally ineffective based on warning letters the Federal Trade Commission's Division of Enforcement sent to 60 manufacturers and retailers of ultrasonic pest-control devices, saying claims about the products had to be supported by scientific evidence.

He noted that the plaintiffs also had cited "a cavalcade of studies" published before 2011 that they said proved the devices were generally ineffective.