The sleep mask feels 'like an octopus has clung to my face.' 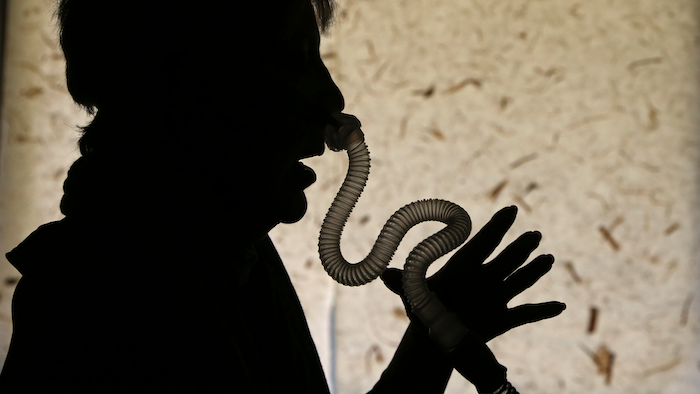 Joelle Dobrow demonstrates how she puts on her sleep apnea breathing device at her home in Los Angeles Thursday, July 12, 2018. It's been two decades since doctors fully recognized that breathing that stops and starts during sleep is tied to a host of health issues, even early death, but there still isn't a treatment that most people find easy to use. Dobrow said it took her seven years to find one she liked. "I went through 26 different mask styles," she said. "I kept a spreadsheet so I wouldn't duplicate it."
AP Photo/Reed Saxon

Every night without fail, Paul Blumstein straps on a mask that prevents him from repeatedly waking up, gasping for air.

It's been his routine since he was diagnosed with a condition called sleep apnea. While it helps, he doesn't like wearing the mask.

"It's like an octopus has clung to my face," said Blumstein, 70, of Annandale, Virginia. "I just want to sleep once in a while without that feeling."

It's been two decades since doctors fully recognized that breathing that stops and starts during sleep is tied to a host of health issues, even early death, but there still isn't a treatment that most people find easy to use.

Airway pressure masks, the most common remedy, have improved in design, getting smaller and quieter, but patients still complain about sore nostrils, dry mouths and claustrophobia.

Now, new ways of conquering sleep apnea, and the explosive snoring that comes with it, are vying for a place in the bedrooms of millions of people craving a good night's sleep. Products range from a $350 restraint meant to discourage back sleeping to a $24,000 surgical implant that pushes the tongue forward with each breath.

Mouthpieces, fitted by dentists, work for some people but have their own problems, including jaw pain. Some patients try surgery, but it often doesn't work. Doctors recommend weight loss, but diet and exercise can be challenging for people who aren't sleeping well.

So far, no pills for sleep apnea exist, but researchers are working on it. One drug containing THC, the active ingredient in marijuana, showed promise in a study this year.

What is sleep apnea? In people with the condition, throat and tongue muscles relax and block the airway during sleep, caused by obesity, aging or facial structure. They stop breathing, sometimes for up to a minute and hundreds of times each night, then awake with loud gasping and snoring. That prevents them from getting deep, restorative sleep.

They are more likely than others to have strokes, heart attacks and heart rhythm problems, and they're more likely to die prematurely. But it's hard to tease out whether those problems are caused by sleep apnea itself, or by excess weight, lack of exercise or something else entirely.

For specialists, the first-choice, most-studied remedy remains continuous positive airway pressure, or CPAP. It's a motorized device that pumps air through a mask to open a sleeper's airway. About 5 million Americans have tried CPAP, but up to a third gave up during the first several years because of discomfort and inconvenience.

Martin Braun, 76, of New York City stopped using his noisy machine and awkward mask, but now he's trying again after a car crash when he fell asleep at the wheel. "That's when I realized, OK this is serious stuff already," said Braun, who has ordered a quieter CPAP model.

Sleep medicine is a relatively new field. The most rigorous studies are small or don't follow patients for longer than six months, said Dr. Alex Krist of Virginia Commonwealth University, who served on a federal guidelines panel that reviewed sleep apnea treatments before recommending against screening adults who have no symptoms.

"We don't know as much about the benefits of treating sleep apnea as we should," said Krist, vice-chair of the U.S. Preventive Services Task Force.

With noticeable results, many CPAP users, even those like Blumstein with a love-hate relationship with their devices, persist.

Blumstein was diagnosed about 15 years ago after he fell asleep behind the wheel at a traffic light. He shared his frustrations with using a mask at a recent patient-organized meeting with the Food and Drug Administration, as did Joelle Dobrow of Los Angeles, who said it took her seven years to find one she liked.

"I went through 26 different mask styles," she said. "I kept a spreadsheet so I wouldn't duplicate it."

Researchers are now focused on how to get people to use a mask more faithfully and predicting who is likely to abandon it and could start instead with a dental device.

"It's the bane of my existence as a sleep doctor," said Dr. James Rowley of Wayne State University in Detroit. "A lot of what sleep doctors do in the first few months after diagnosis is help people be able to use their CPAP."

Getting it right quickly is important because of insurers' use-it-or-lose-it policies.

Medicare and other insurers stop paying for a rented CPAP machine if a new patient isn't using it enough. But patients often have trouble with settings and masks, with little help from equipment suppliers, according to Dr. Susan Redline of Brigham and Women's Hospital in Boston.

All told, it can drive people toward surgery.

Victoria McCullough, 69, of Escondido, California, was one of the first to receive a pacemaker-like device that stimulates a nerve to push the tongue forward during sleep. Now, more than 3,000 people worldwide have received the Inspire implant. Infections and punctured lungs have been reported; the company says serious complications are rare.

McCullough said she asked her doctor to remove the device soon after it was activated in 2015.

"It was Frankenstein-ish. I didn't like it at all," McCullough said. "My tongue was just thrashing over my teeth."

Others like the implant. "My quality of life is 100 percent better," said Kyleene Perry, 74, of Edmonds, Washington, who got one in February after struggling with CPAP for two years. "People are saying, 'You look so much better.' I have a lot more energy."

The THC pill, known as dronabinol, already is used to ease chemotherapy side effects. A small experiment in 73 people suggests it helps some but wasn't completely effective. It may work better in combination with CPAP or other devices, said researcher David Carley of the University of Illinois at Chicago. He owns stock in Respire Rx Pharmaceuticals, which has a licensing agreement with the university for a sleep apnea pill.

As the search for better treatments continues, listening to patients will be key, said Redline.

"We are actually just treating a very tiny percentage of people effectively," she said.