How to Encourage More Girls to Pursue STEM Careers

How parents and educators can close the gender gaps in STEM. 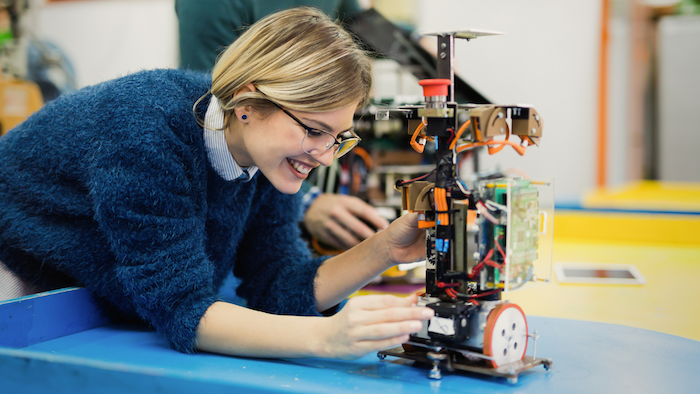 Women remain underrepresented in science, technology, engineering and mathematics, or STEM. In the field of engineering, for example, women earned fewer than 20 percent of doctorates in 2014.

Such gaps, however, are not the result of differences in intellectual ability. Girls currently make up over half of the United States’ gifted student population. If girls have the smarts needed for success in STEM, then what factors explain why they don’t pursue education and careers in these fields?

As researchers who study how stereotypes and other psychological factors can dissuade girls from pursuing careers in math and science, we believe that parents and educators can help turn things around and close the gender gaps in STEM.

As early as first grade, girls are less likely than boys to associate their own gender with intellectual ability. Given how pervasive these stereotypes are, how can parents and teachers step in and shield girls from the belief that they’re less intellectually capable – and therefore less suited to STEM – than boys?

One potential strategy is to help girls adopt a growth mindset, or the belief that their abilities can be developed as opposed to being static and unchangeable. Negative stereotypes rest on the assumption that girls lack the innate ability needed for success. Emphasizing how skills change and develop over time challenges this belief.

When promoting a growth mindset, it’s essential to convey that effort and strategies build ability, and that this is true for everyone – not just girls. For example, a teacher or parent might say, “Anyone who wants to become good at math has to practice by doing lots of problems, especially hard ones that they can learn from.” Unless effort is made to seem normal for everyone, parents and teachers may unintentionally suggest that girls need to work extra hard to compensate for low ability.

Teach the Value of Failure

Another component of fostering a growth mindset is to frame failure as a learning opportunity instead of something to be avoided or brushed under the carpet when it occurs. This can be done by focusing on the learning process – for example, discovering where the mistakes come from and troubleshooting new strategies for the next time. When children see how their efforts have paid off, they’ll be more likely to view STEM ability from a growth perspective.

Stereotypes can also be challenged by exposing girls to examples of women who have succeeded in STEM.

The key is to portray these women as relatable and to highlight how they became scientists, making it easier for girls to envision themselves following a similar path to success.

Another strategy is to provide opportunities for girls to succeed at STEM-related tasks to begin building their confidence. For example, a teacher might frame a programming assignment as a game instead, which might help young girls feel more motivated and capable of success.

When children imagine themselves holding different jobs in the future, they might question whether they are similar to the people who tend to have those jobs. A mismatch between a young person’s self-concept and their impression of the members in a certain field can make the field seem like an unattractive career option.

Unfortunately, media depictions of people in STEM are often narrow and perpetuate false stereotypes, such as that scientists are eccentric, “nerdy” or “geeky,” obsessive and detached from reality.

Similarly, scientists’ work is assumed to be lonely and isolating. It is also seen as being done in pursuit of self-centered goals, such as satisfying one’s curiosity, as opposed to altruistic goals, such as helping others.

These cultural images act as a barrier for girls specifically: Girls are socialized to think of themselves as different from the average scientist on most of these dimensions, leading them to favor fields populated by people with whom they more readily identify and who have more altruistic goals.

However, many modern scientists don’t fit the image of the “geeky,” eccentric loner, and they do work collaboratively for the good of others.

To counteract the effects of these images, parents and teachers can introduce children to diverse and relatable examples of people in STEM. They can do so through online resources, such as This is What a Scientist Looks Like and Skype a Scientist.

Parents and teachers might also tell children that scientists often work together in teamsand invent things that help people in their everyday lives. These types of messages are likely to help both girls and boys because they reveal a deeper purpose for learning STEM-related subjects.

Create an Environment that Promotes Science

Some have attributed women’s underrepresentation in STEM to their inherent preferences. However, the scientific evidence indicates that these preferences are shaped by cultural beliefs. They are not determined by innate differences.

Parents and educators are in a great position to help dispel stereotypes that discourage girls from becoming scientists. And one of the best ways to do that, we believe, is to create environments that promote the idea that science careers are within their reach.

This article was originally published on The Conversation. Read the original article here: http://theconversation.com/heres-how-to-encourage-more-girls-to-pursue-science-and-math-careers-98229.