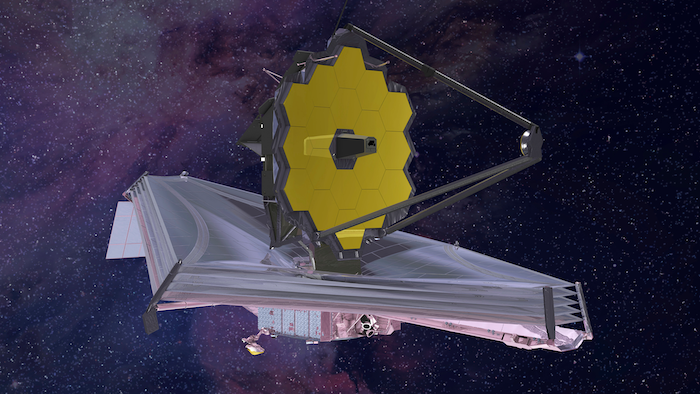 This 2015 artist's rendering provided by Northrop Grumman via NASA shows the James Webb Space Telescope. On Wednesday, June 27, 2018, NASA announced that the next-generation telescope will now fly no earlier than 2021 and the its lifetime cost is now expected to reach nearly $10 billion.
Northrop Grumman/NASA via AP

CAPE CANAVERAL, Fla. (AP) — NASA's next-generation space telescope has been delayed yet again at a staggering cost of $1 million a day.

For the third time in less than a year, the space agency announced a lengthy postponement Wednesday for the James Webb Space Telescope . The observatory will now fly no earlier than 2021; until last fall, it was on the books for a 2018 launch.

The telescope's overall cost is now expected to reach nearly $10 billion. Development cost alone will exceed the $8 billion cap set by Congress by more than $800 million, and require reauthorization.

An independent review board cites worker error and embedded hardware problems for much of the escalating costs and delays.

In a vibration test of the telescope earlier this year in California by prime contractor Northrop Grumman, dozens of loose fasteners — some 70 pieces in all — came off. A few pieces are still missing and could well be inside the observatory. The lock nuts were not tightened properly before the test, according to a report by the board.

In another mishap, the wrong solvent was used to clean spacecraft propulsion valves. No one bothered checking to see whether the cleaner might damage the equipment, said review board chairman Tom Young. The valves had to be repaired or replaced.

Spacecraft sensors were also zapped with excess voltage due to improper wiring. The inspector on duty relied on the technician's word that he'd wired it correctly and did not double-check the work, the board said.

These are just some of the "seemingly small" mistakes that could and should have been avoided, the board said. The loose and lost nuts and bolts alone were enough to bump the mission into 2021, officials noted.

The 29-month delay from 2018 to 2021 represents a $1 billion hit — not including the cost of implementing the board's recommendations. Worker morale also took a hit as the problems mounted; the team had limited time off because of excessive overtime, the board said.

NASA repeatedly was over-optimistic in the work schedule, especially given the complexities and unique features of the Webb telescope, Young said. Its sunshield, the size of a tennis court once unfurled in space, is needed to keep the infrared telescope cold and is a major risk area, he said.

Despite the many problems, the review board urges that the project continue given its "compelling" scientific potential and national importance.

Webb — considered a successor to the Hubble Space Telescope — is meant to peer farther into space and deeper into time than ever before. It will operate from a point 1 million miles (1.6 million kilometers) from Earth, unreachable by astronauts like the low-orbiting Hubble — launched in 1990 with a misshapen mirror — was.

"Make no mistake, I'm not happy sitting here having to share this story. We never want to do this. We always want to talk about the successes that we have," said NASA's science mission chief Thomas Zurbuchen.

Zurbuchen said NASA should have been providing better oversight and is part of the problem along with Northrop Grumman. Besides improved oversight, he said there will be more quality control and more NASA engineers will be taking part in everything moving forward.

"We have to get this right here on the ground, before we go to space," Zurbuchen said. "Webb is worth the wait."

Northrup Grumman acknowledged that problems have put the project behind schedule. The company said it has changed the way it works to prevent future issues.

"We will not sacrifice quality for schedule. Mission success is our number one priority," spokesman Tim Paynter said in a statement.

The review board has issued 32 recommendations and NASA intends to implement them all, officials said.

The observatory's original launch date was 2010 and the cost under $1 billion. It was named after NASA's second administrator, who spearheaded the Apollo moon landings.

Young said if the board's recommendations are "rigorously implemented," then the newest date is feasible. He warned the new date does not allow for any more major problems or mistakes, or extra excessive testing.

"The complexity and risk cannot be overstated or overestimated," he said.