It spotted the woman about six seconds before hitting her.

Tom Krisher
This file image made from video March 18, 2018, of a mounted camera provided by the Tempe Police Department shows an interior view moments before an Uber SUV hit a woman in Tempe, Ariz. In a preliminary report on the crash released Thursday, May 24, federal investigators said the autonomous Uber SUV that struck and killed an Arizona pedestrian in March spotted the woman about six seconds before hitting her, but didn’t stop automatically because emergency braking was disabled.
Tempe Police Department via AP, File

DETROIT (AP) — Federal investigators say the autonomous Uber SUV that struck and killed an Arizona pedestrian in March spotted the woman about six seconds before hitting her, but didn't stop because emergency braking was disabled.

In a preliminary report on the crash, the National Transportation Safety Board said Thursday that emergency braking maneuvers are not enabled while Uber's cars are under computer control, "to reduce the potential for erratic vehicle behavior."

Instead, Uber relies on a human backup driver to intervene. The system, however, is not designed to alert the driver.

A video of the crash showed the driver looking down just before the vehicle struck and killed 49-year-old Elaine Herzberg in Tempe, Arizona.

An Uber spokeswoman would not comment immediately on the report. She said the company is a party to the NTSB investigation and cannot release information.

Sensors on the fully autonomous Volvo XC-90 SUV spotted Herzberg while the car was traveling 43 miles per hour and determined that braking was needed 1.3 seconds before impact, according to the report.

Herzberg was pushing a bicycle across a boulevard in the darkness of March 18 when the crash occurred on a part of the road that had no crosswalk and was not lighted, the report said.

She was wearing dark clothing and did not look in the direction of the vehicle until just before impact. A toxicology report showed that she tested positive for methamphetamine and marijuana, according to the NTSB.

Also, the bicycle had no side reflectors and the front and back reflectors were perpendicular to the Uber SUV. 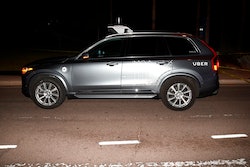 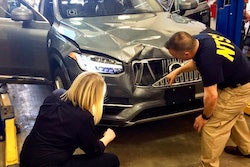 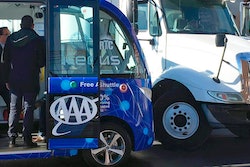