One expert called the White House's attention to AI "better late than never." 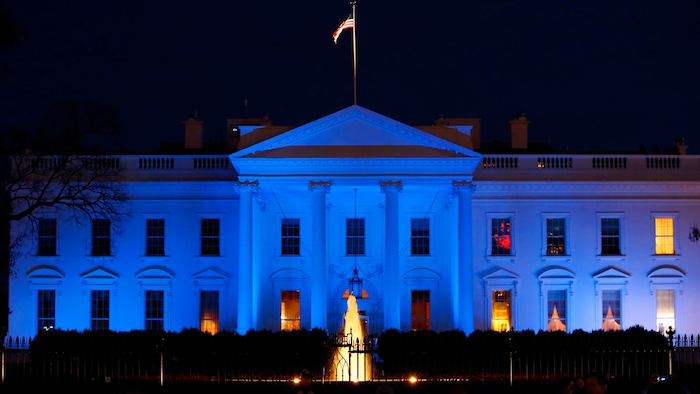 In this April 2, 2017, file photo, the White House is lit with blue lights in honor of World Autism Awareness Day in Washington. Top U.S. tech executives and researchers are gathering at a White House summit, Thursday, May 10, 2018, to press Trump administration officials on investing in artificial intelligence and crafting policies they hope will strengthen the economy without displacing jobs.
AP Photo/Alex Brandon, File

President Donald Trump hasn't said much, if anything, about artificial intelligence, but his administration is warming up to the idea of investing more in the technology and finding ways to build new skills for the U.S. workers it replaces.

"The Trump administration will ensure our great nation remains the global leader in AI," the president's technology adviser, Michael Kratsios, said to a gathering of corporate leaders Thursday.

Some in the crowd had been pushing the administration to focus more on AI and related issues in science and technology. Academic leaders have pitched for more investment in basic research.

There is little doubt that U.S. tech companies and universities are already at the forefront in developing self-driving cars, robotics, smarter health diagnostics and other advances that rely on increasingly intelligent machines. But Trump's lack of public emphasis on both the economic promise and potential dangers of automation has contrasted with other world leaders who have made a vocal push to get their countries ahead.

"It's been a huge missed opportunity up until this point," said Robert Seamans, a White House economist during the Obama administration who now teaches at the NYU Stern School of Business.

Naveen Rao, who leads the AI product unit at chipmaker Intel, said the United States enjoys "a nice lead that happened organically" and with help from prior investments going back decades.

But, he said, "other countries are organized, and organizing right now, around AI and how it's going to change the future of work and the economy."

China's government announced last summer a goal of becoming a global leader in artificial intelligence in just over a decade by developing skills, research and educational resources to achieve major breakthroughs. A report last month from the U.S. Congressional Research Service described China as a "leading competitor" in using AI to develop military applications, including autonomous vehicles and computer systems that can make faster and better-informed decisions.

The European Union's executive branch said last month it wants the bloc's governments and companies to invest at least $24 billion in AI through 2020 in an attempt to remain globally competitive. The leaders of France and the U.K. have talked about making AI investments while also outlining concerns about developing the new technology with ethical guidelines.

John Holdren, who was the top presidential science adviser during the Obama administration, warned that the Trump administration's late entry into outlining its approach to AI reflects broader concerns about its commitment to technological advancement. Holdren noted that his former job leading the nearly 40-year-old Office of Science and Technology Policy remains unfilled.

Trump, who is more than 15 months into his term of office, hasn't yet nominated a replacement. Instead, Kratsios, a deputy assistant to the president for technology policy, detailed the administration's AI strategy Thursday.

Kratsios said a new committee is being formed that will coordinate AI investments across federal agencies, including research related to autonomous systems, biometric identification, computer vision and robotics. He called for a "free-market approach" that would harness the combined strength of government, industry and academia while limiting regulation that could "hamstring" companies, according to his prepared remarks. The event was closed to the press.

While Seamans said the U.S. doesn't need to take a centralized approach, he said it could be useful for administration officials to discuss the impacts of the new technology, especially for consumers and workers whose jobs are becoming obsolete or who will require new skills.

He said it's also important to make it easier for startups to participate so that the technology — and the reams of online data it learns from — isn't tightly controlled by a small group of large companies.

A year ago, Treasury Secretary Steven Mnuchin brushed aside concerns about AI displacing jobs, saying that prospect was so far in the future that "it's not even on my radar screen." That perspective seems to have shifted, as Kratsios argued Thursday that job displacement is "inevitable" and that "we can't sit idle, hoping eventually the market will sort it out."

Garfield said that as new technology displaces some job roles, "the government is well-situated to make sure that people are also deployed in the competencies and in the places those jobs will be."

Garfield and other attendees said they were optimistic about the administration's approach, including efforts to smooth regulations that could foster the adoption of self-driving vehicles and drones .