They are replacing metal helmets with plastic PVC ones made on a 3D printer. 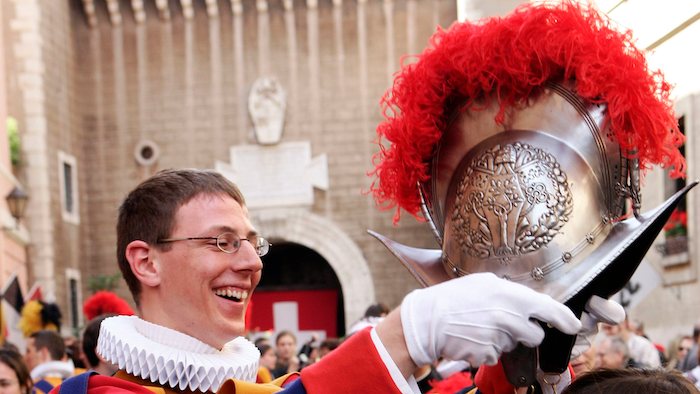 In this May 6, 2007 file photo, an unidentified Swiss Guard puts his helmet on the head of his girlfriend during a ceremony in the "Honour Courtyard" at the Vatican. The world’s oldest standing army is getting some new headgear. The Swiss Guards plan to replace their metal helmets with plastic PVC ones made with a 3-D printer, giving the pope's army cooler and more comfortable headgear when standing guard for hours at a time.
AP Photo/Plinio Lepri, Pool

VATICAN CITY (AP) — The world's oldest standing army is getting some new headgear.

The Swiss Guards plan to replace their metal helmets with plastic PVC ones made with a 3-D printer, giving the pope's army cooler and more comfortable headgear when standing guard for hours at a time.

The Swiss Guards unveiled the helmet prototype before their annual swearing-in ceremony Sunday. Thirty-two new recruits — all of them single Swiss men under age 30 and upstanding Catholics — will join the small corps for a minimum two years by pledging to protect the pope and his successors.

The new helmets won't be donned Sunday since more formal helmets are used for the elaborate, pomp-filled swearing-in ceremony in the San Damaso courtyard of the Apostolic Palace.

But Swiss Guard spokesman Sgt. Urs Breitenmoser said the Guards hope to replace their existing metal helmets by next year if they can find sponsors to pay for the new ones, which cost around 880 euros ($957) apiece, half the cost of the old ones.

The Swiss Guards are famous for their billowy blue, red and yellow striped uniforms. According to a history on the Guards' website, the "Gala Uniform" as it is known, was designed by Commander Jules Repond in the early 1900s and is based on the colors of the Medici family.

It's only one of several outfits the guards wear. Those policing the Vatican's main entrances don far more sober navy uniforms topped with a snappy beret for their regular shifts.

The corps, which historians consider the oldest standing army in the world, was founded in 1506 by Pope Giulio II. Tradition has it that he was so impressed by the bravery of Swiss mercenaries that he asked them to defend the Vatican. Ever since, for more than 500 years, Switzerland has been supplying soldiers to the Vatican.

The May 6 date for the annual swearing-in ceremony commemorates the day in 1527 when 147 guardsmen died while protecting Pope Clement VII during the Sack of Rome.

The new helmets won't protect guardsmen against other such threats, however, since they're plastic and purely ceremonial. Breitenmoser said they would be used for papal Masses and state visits.

How Voxel-Level Control Will Create a New Toolset