Boeing's Work on Fighter Jets Part of $700B Budget

An old fighter jet is the first of several planes being sent to the Boeing facility as the Pentagon spends the biggest budget in its history. 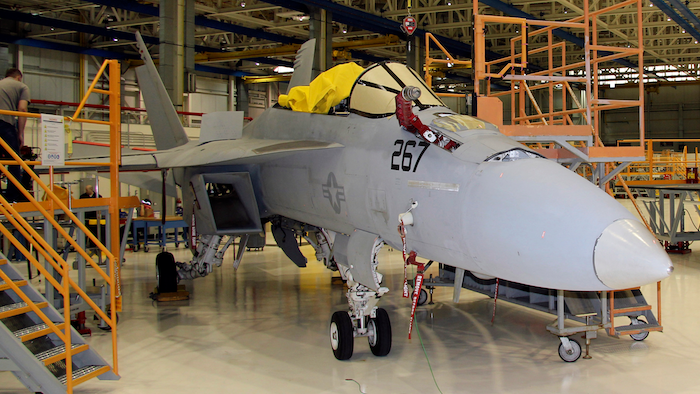 In this Wednesday, April 25, 2018, photo, the first F/A-18 Super Hornet, of many to come, undergoes updates and maintenance at Boeing's facility in St. Louis. This fighter aircraft was delivered by Boeing to the U.S. Navy in November 2004 and is at the end of its lifespan. After being refurbished, it can be piloted for an additional 3,000 flight hours, or 10-15 years.
AP Photo/Ted Shaffrey

ST. LOUIS (AP) — An old fighter jet being refurbished at a hangar in St. Louis is the first of several planes being sent to the Boeing facility as the Pentagon spends the biggest budget in its history (view photos in gallery).

Boeing executives and U.S. Navy members will celebrate with an induction ceremony Thursday.

The first-arrived Super Hornet had been flown by the Navy's Gladiators Strike Fighter Squadron in Virginia Beach since 2004. It's among four planes that will undergo upgrades this year at a cost of $73 million to keep them in the fleet for another dozen years.

Boeing has a contract to deliver 134 new F/A-18 Super Hornets over the next few years. Each costs more than $70 million.

At $700 billion, the U.S. defense budget is bigger than any other country. The biggest winners in the military buildup are the country's largest defense contractors, such as Boeing, Lockheed Martin and General Dynamics, which spend millions of dollars each year lobbying Congress.

May 25th, 2017
Latest in Product Development