Officials say it could save taxpayers tens of millions of dollars on cleanups. 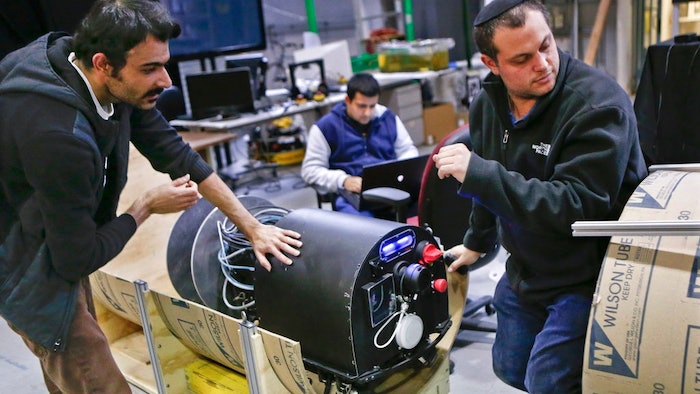 In this photo made on Wednesday, April 4, 2018, Mohammad Mousaei, top, and David Kohandash work on the RadPiper robot in the robotics institute at Carnegie-Mellon University in Pittsburgh. The mechanism is designed to measure potentially hazardous radiation is intended to go through pipes at a former uranium plant being cleaned up in southern Ohio.
AP Photo/Keith Srakocic

Officials say it's safer, more accurate and tremendously faster than having workers take external measurements to identify which pipes need to be removed and decontaminated at the Portsmouth Gaseous Diffusion Plant in Piketon. They say it could save taxpayers tens of millions of dollars on cleanups of that site and one near Paducah, Kentucky, which for decades enriched uranium for nuclear reactors and weapons.

The RadPiper robot was developed at Carnegie Mellon University in Pittsburgh for the U.S. Department of Energy, which envisions using similar technology at other nuclear complexes such as the Savannah River Site in Aiken, South Carolina, and the Hanford Site in Richland, Washington.

"A lot of the easy stuff has already been done," Whittaker said. "As the nation addresses the next 50 years of this important cleanup, robots are going to have an increasingly important role in that."

The technology development director for the energy department's Office of Environmental Management, Rodrigo Rimando Jr., said every hour RadPiper operates will save an estimated eight hours of the conventional method.

That method is a slog: Once insulation and other materials are cleared to access the pipes, a worker elevated on scaffolding and wearing protective gear holds up a heavy detector, takes a reading, writes it down, and then repeats that for the next foot of pipe.

Workers did that 1.4 million times in one building over three years, said Marty Reibold, director of strategic initiatives for Fluor-BWXT Portsmouth, the contractor decommissioning the site.

Now they're focused on an even larger building, big enough to house 58 football fields on its two levels, Reibold said.

With the robot mapping uranium deposits and automatically logging data, some pipe analysis that used to take weeks can be finished same-day.

"The analyst can look at it, push the button, sign the report and say, 'OK, I'm done with that pipe,' so that's huge for us," Reibold said.

Two big lead discs bracket RadPiper's detector, making it look a bit like a foot-long barbell. It works only in straight pipes, so workers still must manually check bends and valves.

The site will get two RadPipers, fitted for use in about 15 miles of pipes between 2.5 and 3.5 feet (0.8 and 1.1 meters) in diameter. The creators hope to make another version for the many more miles of smaller-diameter pipes.

The union representing many workers at the site remains cautious about robots replacing good-paying, locally coveted jobs. But it also could free up workers for other tasks, reduce their safety risks and teach them new skills, and if it accelerates cleanup to sooner attract new industry and jobs to the site, all the better, local union president Herman Potter said.

George Hornberger, director of the Vanderbilt Institute for Energy and Environment, said the challenge of cleaning up industrial facilities that processed radioactive materials is addressing health and safety risks in a way that protects workers but is also cost-effective. RadPiper sounds beneficial on both fronts, said Hornberger, who wasn't involved in the project.

The creators say the project's speed points to its perceived value. They hatched the idea at a conference in March 2017 and were testing a version by last fall — lightning-fast for a $1.4-million, government-funded project and the procedural hurdles and approvals that entails.

Others are taking notice. Companies and countries have expressed interest in the technology, Rimando said, noting it could be useful anywhere with nuclear capabilities.

Five Reasons to Add Automation to Your Warehouse