That means more road and rail projects and fewer greenways and bike lanes. 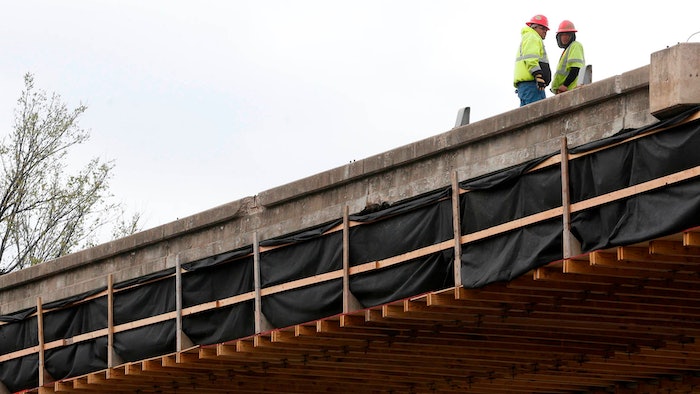 In this file photo, construction workers prepare for the teardown of a U.S. 75 bridge deck over Southwest Boulevard in Tulsa.
Matt Barnard/Tulsa World via AP

WASHINGTON (AP) — Forget about bike-share stations in Chicago or pedestrian walkways in Oakland. That's so Obama-era. In the Trump administration, a popular $500 million transportation grant program is focused more on projects in rural areas that turned out for Donald Trump in the 2016 election. That means more road and rail projects in GOP strongholds such as Idaho, North Dakota, and Oklahoma, and fewer "greenways," ''complete streets" and bike lanes.

The latest round of these grants has nothing for New York City, Los Angeles or Chicago. Money in those Democratic heavy states went instead to projects in Trump-friendly regions: repainting a bridge in New York's North Country, contributing to a highway project in Modesto, California, and upgrading an interstate highway in southern Illinois.

It's a refocusing from the priorities of the previous administration, which gave most of these TIGER (Transportation Investment Generating Economic Recovery) grants to urban areas represented by President Barack Obama's Democratic allies on Capitol Hill.

"More than 64 percent of this round of TIGER funding was awarded to rural projects, a historic number that demonstrates this Administration's commitment to supporting the country's rural communities," the Transportation Department said in a release announcing the grants last month. "I was very pleased," said Sen. Susan Collins, R-Maine, when asked about the focus on rural areas. Maine won $10.8 million to help repair three rural bridges on routes critical to the state's timber industry.

The program was established under Obama's 2009 economic recovery bill. The grants, distributed at the discretion of the administration, are just a small fraction of the overall federal transportation dollars when compared with more than $50 billion distributed annually to states by formula from the highway trust fund.

Trump has twice targeted the grant program for elimination, only to sign a huge spending bill into law last month that tripled its budget to $1.5 billion. Questions arose during the Obama administration about political favoritism when grants consistently went in greater numbers to congressional districts represented by Democrats. For example, in 2013, about two-thirds of TIGER money was awarded to such districts.

One of those grants went to help Florida International University construct a pedestrian bridge over a busy road. The structure collapsed last month, killing six people.

Grants are awarded according to a competitive process that analyzes criteria such as economic benefits, safety, state of disrepair, and the environmental benefits of projects. The Government Accountability Office looked into the program a few years ago at the request of then-Sen. David Vitter, R-La., and found that projects with lower grades often won out over top-rated projects.

That's a reversal from the Obama administration, which in its last year in office provided just $102 million in grants to rural areas. That was just above the 20 percent minimum required by the law that established the program.

The Obama administration funded numerous urban projects centered on pedestrian walkways and bike trails. More than one-third of Obama's final round of grants featured bike-friendly projects. A 2016 grant, for instance, helped pay for a "multi-modal greenway" in Lexington, Kentucky, to integrate a network of bike and pedestrian trails.

The Trump grants contain just a handful of such projects, including a pedestrian and bike trail along the Schuylkill River in Philadelphia and preservation of a historic railroad pedestrian bridge in Mill City, Oregon. The Trump administration is focused more on economic development projects such as port upgrades in Alabama, Baltimore and New Orleans. Some $25 million would help Arizona ease congestion from a busy U.S.-Mexico port of entry in Nogales.

Other projects include reopening an inactive freight rail line in Idaho, easing traffic in Big Sky, a tourist destination in Montana, and contributing to a highway bypass around Lincoln, Nebraska.