Tom Krisher
Uber has decided to stop testing autonomous vehicles on California public roads by letting its state permit expire on Saturday, March 31, 2018, without renewing it. Immediately after the crash, Uber voluntarily suspended its autonomous vehicle testing in Arizona, as well as California, Pittsburgh and Toronto. The company said in a statement that it decided not to reapply for the California permit "with the understanding that our self-driving vehicles would not operate in the state in the immediate future."
AP Photo/Eric Risberg, File

DETROIT (AP) — Uber has decided to stop testing autonomous vehicles on California public roads by letting its state permit expire on Saturday without renewing it.

If the ride-hailing service wants to return to the state, it will have to get a new permit and address any investigations into a crash involving one of its autonomous test SUVs in Arizona that killed a pedestrian, the California DMV said in a letter sent to the company on Tuesday.

"Any application for a new permit will need to address any follow-up analysis or investigations from the recent crash in Arizona and may also require a meeting with the department," said the letter from DMV Deputy Director Brian Soublet.

California is the second state in which Uber won't be able to test autonomous vehicles on public roads. On Monday, Arizona Gov. Doug Ducey suspended Uber's self-driving vehicle testing privileges due to the crash.

On the night of March 18 an Uber autonomous Volvo SUV struck and killed 49-year-old Elaine Herzberg, who was walking a bicycle across a darkened boulevard in Tempe, near Phoenix. Experts have told The Associated Press that the SUV's laser and radar sensors should have spotted Herzberg, and the vehicle should have stopped. In addition, the SUV's human backup driver appeared to be looking down before the crash and had a stunned look when it happened, according to dash camera video released by police.

Immediately after the crash, Uber voluntarily suspended its autonomous vehicle testing in Arizona, as well as California, Pittsburgh and Toronto. The company said in a statement that it decided not to reapply for the California permit "with the understanding that our self-driving vehicles would not operate in the state in the immediate future."

California is a relatively small testing ground for Uber with 29 vehicles permitted for testing. The company has about 200 vehicles at all four testing locations.

Uber is still allowed to test on public roads in Pennsylvania and Ontario. Pennsylvania said in a statement that it will work with Uber to "ensure any restart of testing is done with safety as the top priority." Ontario's Ministry of Transportation said it is watching developments in Arizona and will consider appropriate measure when more is known.

The Uber crash is being investigated by Tempe police, as well as the National Transportation Safety Board and the National Highway Traffic Safety Administration.

It has caused angst across the tech and auto businesses, with companies such as Toyota and NVIDIA suspending their autonomous vehicle tests on public roads. NVIDIA's fleet is small in California.

John Krafcik, CEO of Waymo, which is Google's self-driving car unit, has expressed confidence in his company's system and its ability to interact with pedestrians.

Mobileye, an Israeli unit of Intel that makes software brains that interpret what sensors are seeing, has called for the industry to discuss a framework to validate the safety of autonomous vehicles. 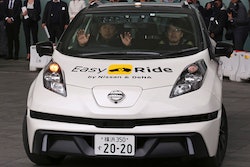 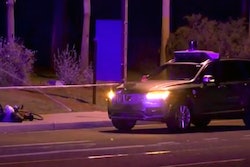