Tesla is working to uncover what led to a Model X crash last week that killed the driver. 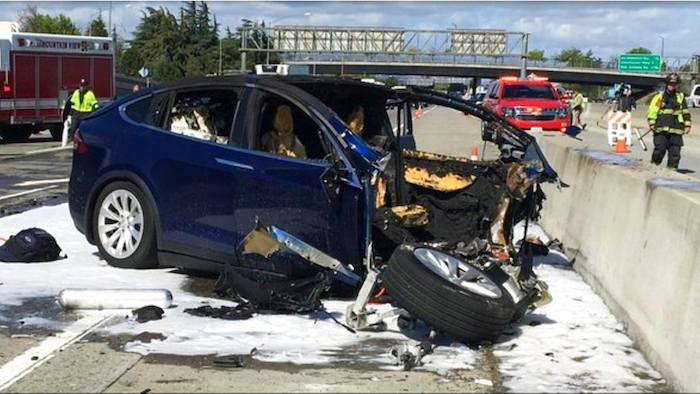 In this Friday March 23, 2018 photo provided by KTVU, emergency personnel work a the scene where a Tesla electric SUV crashed into a barrier on U.S. Highway 101 in Mountain View, Calif. The National Transportation Safety Board has sent two investigators to look into a fatal crash and fire Friday in California that involved a Tesla electric SUV. The agency says on Twitter that it's not clear whether the Tesla Model X was operating on its semi-autonomous control system called Autopilot at the time. Investigators will study the fire that broke out after the crash.
KTVU via AP

DETROIT (AP) — A missing or damaged safety shield on the end of a California freeway barrier worsened the impact of a crash involving a Tesla SUV that killed a man last week, the electric car maker said on its website.

The company also said in the statement that it doesn't know what caused the Model X to crash Friday on U.S. 101 near Mountain View, and it's also unsure if the SUV was operating on its semi-autonomous "Autopilot" system. Tesla said it's working with authorities to recover logs from the damaged SUV's computer.

The SUV was traveling at "freeway speed" when it hit the barrier near Mountain View. The California Highway Patrol says the SUV caught fire for unknown reasons. The 38-year-old driver was pulled from the vehicle by rescuers and later died at a hospital.

On Tuesday, the U.S. National Transportation Safety Board said it had dispatched a two-person team to investigate the crash and fire.

Tesla's semi-autonomous system is designed to keep a vehicle centered in its lane at a set distance from cars in front of it and also can change lanes and brake automatically.

Photographs taken of the SUV show the front of the vehicle was obliterated. Its hood was ripped off and its front wheels were strewn on the freeway. Two other cars were involved in the crash, but their drivers were not reported injured, the CHP said.

Tesla said it in the statement late Tuesday that it was "deeply saddened" by the crash, which it said was made more severe because a crash attenuator, which protects vehicles from hitting the end of concrete lane divider, had either been removed or damaged in a prior accident and was not replaced. "We have never seen this level of damage to a Model X in any other crash," the company wrote.

Tesla also said its owners have driven the same stretch of road with Autopilot on about 85,000 times since 2015, and to its knowledge, there has never been a crash. Tesla says its data shows that a gasoline-powered car in the U.S. is five times more likely to experience a fire than a Tesla.

News of the crash investigation helped to send Tesla stock tumbling more than 8 percent on Tuesday. Late Tuesday, Moody's downgraded the company's credit rating and gave it a negative outlook. Shares continued to decline Wednesday, slipping nearly 4 percent after the market opened to $268.61. The shares have declined about 14 percent since the start of the year on fears of production delays with the mass-market Model 3 electric car.

The NTSB investigation is the second opened by the agency this year involving a Tesla vehicle.

In January, the NTSB and the National Highway Traffic Safety Administration dispatched teams to Culver City, near Los Angeles, to investigate the crash of a Model S electric car that may have been operating under the Autopilot system.

That crash remains under investigation.

The investigations come as Congress and federal agencies grapple with how to regulate autonomous vehicles and those with systems that are partially self-driving.

Tesla has taken steps to prevent drivers from using Autopilot improperly, including measuring the amount of torque applied to the steering wheel and sending visual and audio warnings.

If the warnings are ignored, drivers would be prevented from using Autopilot, the company said.