The SUV's sensors should have seen the woman pushing a bicycle and braked before the impact. 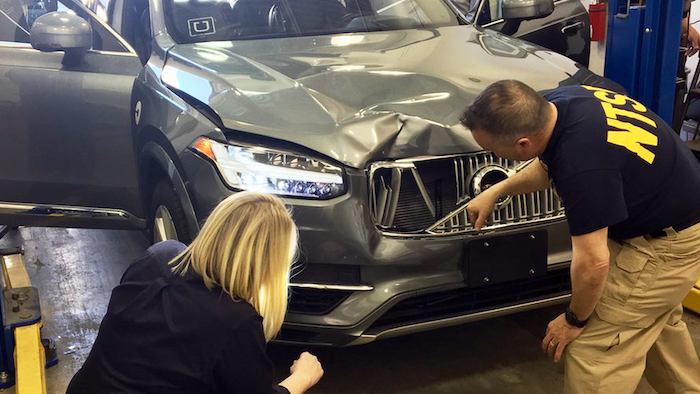 TEMPE, Ariz. (AP) — Two experts say video of a deadly crash involving a self-driving Uber vehicle shows the sport utility vehicle's laser and radar sensors should have spotted a pedestrian, and computers should have braked to avoid the crash (view photos in gallery).

Authorities investigating the crash in a Phoenix suburb released the video of Uber's Volvo striking a woman as she walked from a darkened area onto a street.

Experts who viewed the video told The Associated Press that the SUV's sensors should have seen the woman pushing a bicycle and braked before the impact.

Also, Uber's human backup driver appears on the video to be looking down before crash and appears startled about the time of the impact.

"The victim did not come out of nowhere. She's moving on a dark road, but it's an open road, so Lidar (laser) and radar should have detected and classified her" as a human, said Bryant Walker Smith, a University of South Carolina law professor who studies autonomous vehicles.

Sam Abuelsmaid, an analyst for Navigant Research who also follow autonomous vehicles, said laser and radar systems can see in the dark much better than humans or cameras and that the pedestrian was well within the system's range.

"It absolutely should have been able to pick her up," he said. "From what I see in the video it sure looks like the car is at fault, not the pedestrian."

The video could have a broad impact on autonomous vehicle research, which has been billed as the answer to cutting the 40,000 traffic deaths that occur annually in the U.S. in human-driven vehicles.

Proponents say that human error is responsible for 94 percent of crashes, and that self-driving vehicles would be better because they see more and don't get drunk, distracted or drowsy.

But the experts said it appears from the video that there was some sort of flaw in Uber's self-driving system.

The video, Smith said, may not show the complete picture, but "this is strongly suggestive of multiple failures of Uber and its system, its automated system, and its safety driver."

Tempe police, as well as the National Transportation Safety Board and the National Highway Traffic Safety Administration are investigating the Sunday night crash, which occurred outside of a crosswalk on a darkened boulevard.

The crash was the first death involving a fully autonomous test vehicle. The Volvo was in self-driving mode traveling about 40 mph (64 kph) with a human backup driver at the wheel when it struck 49-year-old Elaine Herzberg, police said.

The lights on the SUV did not illuminate Herzberg until a second or two before impact, raising questions about whether the vehicle could have stopped in time.

Tempe Police Chief Sylvia Moir told the San Francisco Chronicle earlier this week that the SUV likely would not be found at fault.

But Smith said that from what he observed on the video, the Uber driver appears to be relying too much on the self-driving system by not looking up at the road.

"The safety driver is clearly relying on the fact that the car is driving itself. It's the old adage that if everyone is responsible no one is responsible," Smith said. "This is everything gone wrong that these systems, if responsibly implemented, are supposed to prevent."

The experts were unsure if the test vehicle was equipped with a video monitor that the backup driver may have been viewing.

Uber immediately suspended all road-testing of such autos in the Phoenix area, Pittsburgh, San Francisco and Toronto.

An Uber spokeswoman, reached Wednesday night by email, did not answer specific questions about the video or the expert observations.

"The video is disturbing and heartbreaking to watch, and our thoughts continue to be with Elaine's loved ones. Our cars remain grounded, and we're assisting local, state and federal authorities in any way we can," the company said in a statement.

Tempe police have identified the driver as 44-year-old Rafael Vasquez. Court records show someone with the same name and birthdate as Vasquez spent more than four years in prison for two felony convictions — for making false statements when obtaining unemployment benefits and attempted armed robbery — before starting work as an Uber driver.

Tempe police and the NTSB declined to say whether the Vasquez who was involved in the fatal crash is the same Vasquez with two criminal convictions.

Attempts by the AP to contact Vasquez through phone numbers and social media on Wednesday afternoon were not successful.

Local media have identified the driver as Rafaela Vasquez. Authorities declined to explain the discrepancy in the driver's first name.

The fatality has raised questions about whether Uber does enough to screen its drivers.

The company bans drivers convicted of violent crimes or any felony within the past seven years. Records show Vasquez' offenses happened before the seven-year period, in 1999 and 2000.

The company's website lists its pre-screening policies for drivers that spell out what drivers can and cannot have on their record to work for Uber.

Their driving history cannot have any DUI or drug-related driving offenses within the past seven years, for instance. They also are prevented from having more than three non-fatal accidents or moving violations within the past three years.