He opened his first store dedicated to selling only toys in 1957. 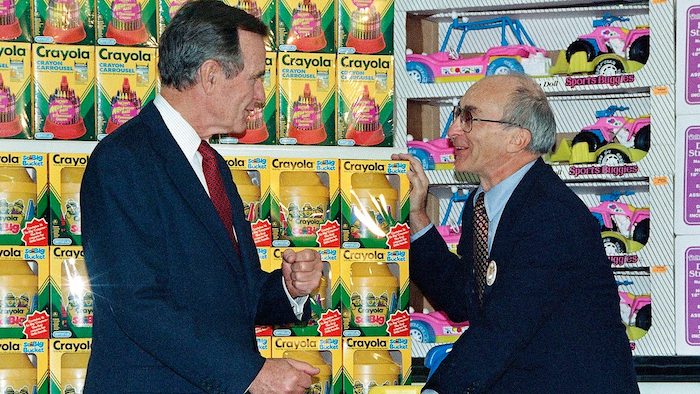 NEW YORK (AP) — Charles P. Lazarus, the World War II veteran who founded Toys R Us six decades ago and transformed it into an iconic piece of Americana, died Thursday at age 94, a week after the chain announced it was going out of business.

Toys R Us confirmed Lazarus' death in a statement.

"There have been many sad moments for Toys R Us in recent weeks, and none more heartbreaking than today's news about the passing of our beloved founder, Charles Lazarus," the company said. "Our thoughts and prayers are with Charles' family and loved ones."

Lazarus, who stepped down as CEO of Toys R Us in 1994, transformed the toy industry with a business model that became one of the first retail category killers — big stores that are so devoted to one thing, and have such an impressive selection, that they drive smaller competitors out of business.

More recently, Toys R Us found itself unable to survive the trends of the digital age, namely competition from the likes of Amazon, discounters like Walmart and mobile games. No longer able to bear the weight of its heavy debt load, the company announced last week that it would close or sell its 735 stores across the country, including its Babies R Us stores.

But for decades, it was Toys R Us that drove trends in child's play, becoming a launchpad for what became some of the industry's hottest toys.

Lazarus, the son of a bicycle store owner, modeled his business after the self-service supermarkets that were becoming popular in the 1950s, stacking merchandise high to give shoppers the feeling it had an infinite number of toys. The stores created a magical feeling for children roaming aisles filled with Barbies, bikes and other toys laid out in front of them.

The chain has its roots in Children's Bargain Town, the baby furniture store that Lazarus opened 1948 in his hometown of Washington, D.C. He began selling toys after a couple of years when customers began asking for them, and he quickly concluded that, in the baby-boom years, toys were a more lucrative business than furniture.

He opened his first store dedicated to selling only toys in 1957, calling it Toys R Us with the "R'' spelled backward to give the impression that a child wrote it. Shopping carts stood ready for customers to grab and fill up themselves, supermarket-style.

In 1965, Geoffrey the giraffe became the company's mascot, appearing in his first TV commercial in 1973. By the 1980s and early 90s, Toys R Us dominated the toy-store business and its jingle, "I'm a Toys R Us kid" became an anthem for children across the country.

In 1992, Lazarus traveled with President George H.W. Bush for the opening of the first Toys R Us in Japan.

He himself loomed large over his industry at the heyday of his company, personally traveling to the annual Toy Fair in Manhattan. Thousands of buyers from around the world attend but back then, it was Lazarus whom manufacturers were most anxious to impress, said Marc Rosenberg, a veteran toy marketer and founder of SkyBluePink Concepts.

The opportunity to give "Mr. Lazarus" a tour of your showroom was right of passage for marketers, said Rosenberg, who first met Lazarus on such an occasion in 1987 as marketer for Tiger Electronics. Lazarus walked through the showrooms giving feedback on the playthings arrayed before him, trailed by a group of employees feverishly taking notes on his every word, Rosenberg said.

"As a young marketing guy, if Charles Lazarus liked something you were doing, it was like the greatest thing in the world," Rosenberg said. "He had a dry sense of humor. If he liked something, he would show it. He would laugh but it wasn't easy to get him to laugh."

Rosenberg said Lazarus understood that the success of Toy R Us stemmed from creating a "circus-like atmosphere to keep kids wanting to come back every week."

Geoffrey the giraffe soon started a family, with wife Gigi and a son and daughter. The giraffe family would make regular visits to the stores, parades and other events. Rosenberg said the company cut down on such events after Lazarus left and struggled to find a model that could help it compete with the likes of Walmart, which offered a similar selection at lower prices, and later, Amazon.

The Black Hole for Toy Makers

Hasbro, Mattel Will Save Toys R Us