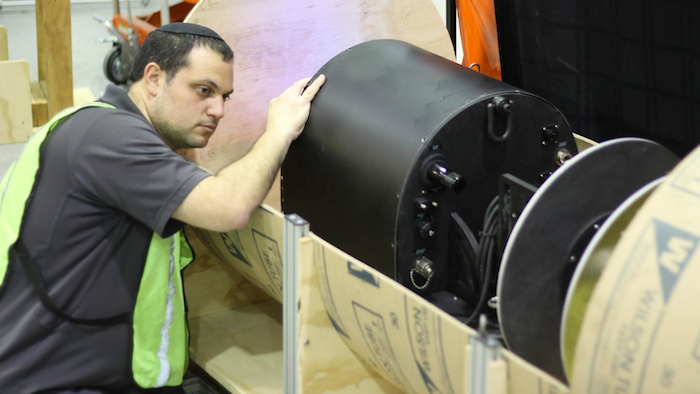 PITTSBURGH--A pair of autonomous robots developed by Carnegie Mellon University's Robotics Institute will soon be driving through miles of pipes at the U.S. Department of Energy's former uranium enrichment plant in Piketon, Ohio, to identify uranium deposits on pipe walls.

The CMU robot has demonstrated it can measure radiation levels more accurately from inside the pipe than is possible with external techniques. In addition to savings in labor costs, its use significantly reduces hazards to workers who otherwise must perform external measurements by hand, garbed in protective gear and using lifts or scaffolding to reach elevated pipes.

DOE officials estimate the robots could save tens of millions of dollars in completing the characterization of uranium deposits at the Portsmouth Gaseous Diffusion Plant in Piketon, and save perhaps $50 million at a similar uranium enrichment plant in Paducah, Kentucky.

"This will transform the way measurements of uranium deposits are made from now on," predicted William "Red" Whittaker, robotics professor and director of the Field Robotics Center.

Heather Jones, senior project scientist will present two technical papers about the robot on Wednesday at the Waste Management Conference in Phoenix, Arizona. CMU also will be demonstrating a prototype of the robot during the conference.

CMU is building two of the robots, called RadPiper, and will deliver the production prototype units to DOE's sprawling 3,778-acre Portsmouth site in May. RadPiper employs a new "disc-collimated" radiation sensor invented at CMU. The CMU team, led by Whittaker, began the project last year. The team worked closely with DOE and Fluor-BWXT Portsmouth, the decommissioning contractor, to build a prototype on a tight schedule and test it at Portsmouth last fall.

Shuttered since 2000, the plant began operations in 1954 and produced enriched uranium, including weapons-grade uranium. With 10.6 million square feet of floor space, it is DOE's largest facility under roof, with three large buildings containing enrichment process equipment that span the size of 158 football fields. The process buildings contain more than 75 miles of process pipe.

Finding the uranium deposits, necessary before DOE decontaminates, decommissions and demolishes the facility, is a herculean task. In the first process building, human crews over the past three years have performed more than 1.4 million measurements of process piping and components manually and are close to declaring the building "cold and dark."

"With more than 15 miles of piping to be characterized in the next process building, there is a need to seek a smarter method," said Rodrigo V. Rimando, Jr., director of technology development for DOE's Office of Environmental Management. "We anticipate a labor savings on the order of an eight-to-one ratio for the piping accomplished by RadPiper." Even with RadPiper, nuclear deposits must be identified manually in some components.

RadPiper will operate initially in pipes measuring 30 inches and 42 inches in diameter and will characterize radiation levels in each foot-long segment of pipe. Those segments with potentially hazardous amounts of uranium-235, the fissile isotope of uranium used in nuclear reactors and weapons, will be removed and decontaminated. The vast majority of the plant's piping will remain in place and will be demolished safely along with the rest of the facility.

The tetherless robot moves through the pipe at a steady pace atop a pair of flexible tracks. Though the pipe is in straight sections, the autonomous robot is equipped with a lidar and a fisheye camera to detect obstructions ahead, such as closed valves, Jones said. After completing a run of pipe, the robot automatically returns to its launch point. Integrated data analysis and report generation frees nuclear analysts from time-consuming calculations and makes reports available the same day.

The robot's disc-collimated sensing instrument uses a standard sodium iodide sensor to count gamma rays. The sensor is positioned between two large lead discs. The lead discs block gamma rays from uranium deposits that lie beyond the one-foot section of pipe that is being characterized at any given time. Whittaker said CMU is seeking a patent on the instrument.

The Robotics Institute and Whittaker have extensive experience with robots in nuclear facilities, including the design and construction of robots to aid with the cleanup of the damaged Three Mile Island reactor building in Pennsylvania and the crippled Chernobyl reactor in Ukraine.

DOE has paid CMU $1.4 million to develop the robots as part of what CMU calls the Pipe Crawling Activity Measurement System.

In addition to the Portsmouth and Paducah plants, robots could be useful elsewhere in DOE's defense nuclear cleanup program, which is not even half complete, Rimando said. Other sites where robots might be used are the Savannah River Site in Aiken, South Carolina, and the Hanford Site in Richland, Washington.

"With at least 50 more years of nuclear cleanup to be performed, the Robotics Institute could serve as a major pipeline of roboticists for DOE's next several workforce generations," he added.