Are these affordable homes just a pipe dream? 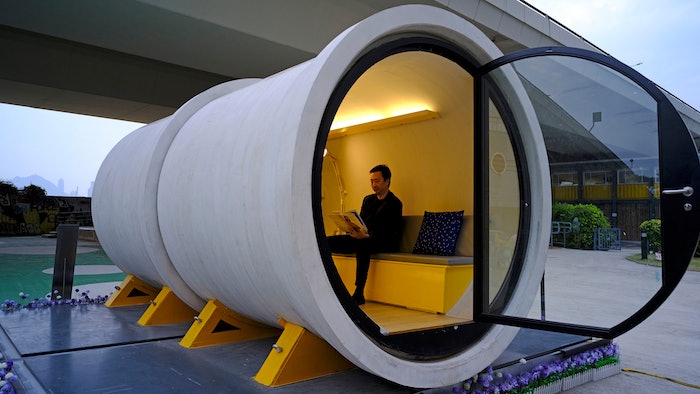 James Law's OPod Tube Housing is still just at the conceptual stage, but it's attracted attention as an innovative though untested way to deal with housing shortages.

At 100 square feet (9.3 square meters) the tube houses are not that much smaller than Hong Kong's infamous "cubicle homes" — older apartments subdivided into cramped and squalid living spaces. They're roomier than other types of tenement housing, such as so-called "coffin" and "cage" homes.

The idea came to Law when he spotted some leftover storm sewer drain pipes at a construction site.

They might be converted into "really cute micro-living architecture," he said.

Law has only built a prototype to test public interest but has already received inquiries from around the world.

There's a lot crammed into the OPod. It consists of two sections of 2.5-meter (about 8 foot) diameter pipes fitted with glass doors on both ends. A living area inside includes a bench that converts into a bed, opposite shelves on the facing, curving wall. Another shelf fits a bar fridge and a microwave next to a galley sink beneath an air conditioner. A tiled bathroom at the end includes a combined shower and toilet.

The OPod cost $15,000 to build. Law said he envisions renting them out for less than $400 a month to recent graduates on low incomes trying to get a foot on the housing ladder. That's a fraction of the market rate.

"My dream is the OPods will be a new kind of living for young people just starting out in life," Law said.

It's less a long-term solution to Hong Kong's housing crisis than a novel way to make use of leftover spaces where conventional housing doesn't fit. The pipe homes could be stacked into gaps between buildings, under highway overpasses or on the roofs of existing buildings.

"This kind of house is really portable. We (can) actually make it in a construction site and then we lift it onto a truck and we can deliver it anywhere," Law said. "So it represents a new, affordable architecture."

May 25th, 2022
Latest in Product Development