Until now, driverless cars could only be tested on public roads in the state if a person could take the wheel in an emergency. 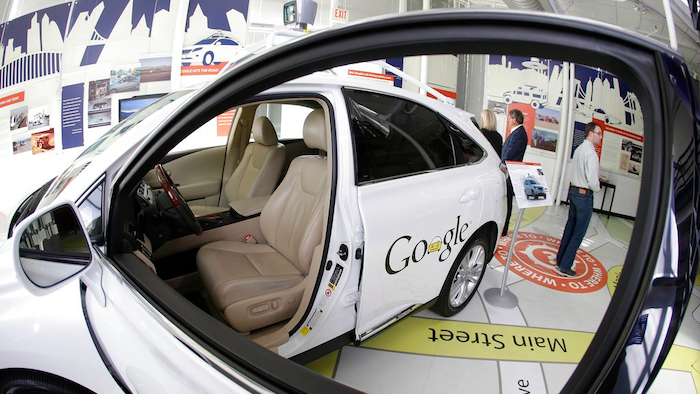 In this photo Wednesday, May 14, 2014 file photo, a Google self-driving car is on exhibit at the Computer History Museum in Mountain View, Calif. Driverless cars will be tested on California roads for the first time without a human being behind a steering wheel under new rules for the fast-developing technology. The regulations approved Monday, Feb. 26, 2018, are a major step toward getting autonomous vehicles onto the streets of California, the nation's self-driving car hub.
AP Photo/Eric Risberg, File

LOS ANGELES (AP) — Driverless cars will be tested in California for the first time without a person behind a steering wheel under new rules that state regulators approved Monday for the fast-developing technology.

The regulations are a major step toward getting autonomous vehicles to dealerships and onto the streets of California, where companies such as Tesla and Waymo are leading the way on the technology. Until now, driverless cars could only be tested on public roads in the state if a person could take the wheel in an emergency.

"I think this is a move that had to happen for California to stay competitive in this field," said Nidhi Kalra, a Rand Corp. senior scientist who has been studying the issue for a decade.

Although the technology is being developed in California, companies such as Waymo have already been testing in other states such as neighboring Arizona because requiring a human driver limits the kind of car that can be tested, she said.

"You can't test what true, full autonomy looks like" unless there's no driver at all, Kalra said. "To be able to test it right in your backyard is a really big deal."

But the advocacy group Consumer Watchdog slammed the new rules, claiming autonomous cars have not yet been proven safe enough to be deployed without a human backup driver.

"It will be just like playing a video game, except lives will be at stake," said John Simpson, the group's privacy and technology project director.

Fifty companies already have permits to test on public roads and highways in California, a prime proving ground given its size as the most populous state, its clout as the nation's biggest car market and its longtime role as a cultural trendsetter.

The vehicles will no longer need to have drivers inside during tests, but people will still be in charge. Under the regulations, driverless cars being tested on public roads must have a remote operator monitoring at all times, ready to take over as needed. The remote operator must also be able to communicate with police as well as any passengers in the event of an accident.

Manufacturers must provide the DMV a law enforcement interaction plan as one of the requirements to get approved for a permit.

Car makers can submit applications starting March 2 and the first permits will be issued when the regulations go into effect April 2.

The rules, written by California's Department of Motor Vehicles and approved by the state's Office of Administrative Law, also create the framework under which consumers can eventually buy driverless cars.

Department of Motor Vehicles Director Jean Shiomoto said it's a big boost for regulations in the works for years and that "safety is our top concern."

Major automakers like Mercedes, BMW, Ford, Nissan and Volvo have all said it will likely be at least 2020 before their driverless vehicles are available, and even then, they could be confined to ride-hailing fleets and other shared applications.

Tesla Inc. said last year that the cars it's making have the hardware they need for full self-driving. The company is still testing the software and won't make it available to owners without regulatory approval.

The California regulations do not include testing and deployment of autonomous trucks and other commercial vehicles.