Microchips in the back of jerseys and in the puck are tracked by cameras high above the ice. 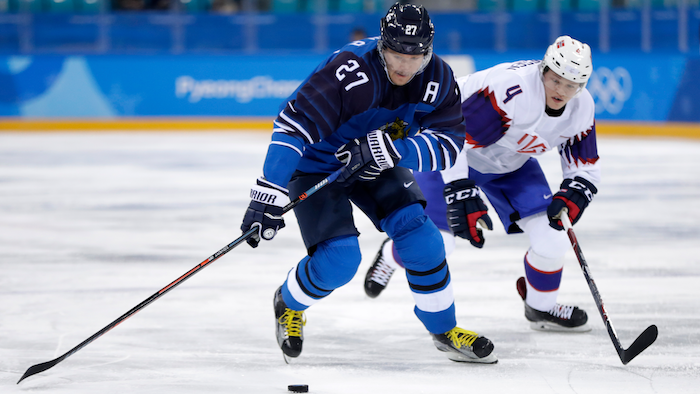 Petri Kontiola (27), of Finland, drives the puck against Johannes Johannesen (4), of Norway, during the first period of the preliminary round of the men's hockey game at the 2018 Winter Olympics in Gangneung, South Korea, Friday, Feb. 16, 2018.
AP Photo, Julio Cortez

They couldn't believe captain Lasse Kukkonen only had five sprints in a game and Petri Kontiola had a whopping 46.

Even better: They don't even know what qualifies as a sprint.

"We were looking at the stats and average speeds and making fun of some guys," forward Oskar Osala said. "How can you have 46 sprints in a game? It sounds like a ridiculous amount of sprints."

At these Olympics, data on speed, acceleration, stopping, distance traveled, shift lengths and ice time is available to teams in what could be the next step for puck and player tracking across hockey, including the NHL. Referees even have whistles digitally connected to the clock so it stops immediately without the need for a timekeeper's quick reaction that will always be a step slow.

Yeah, this feels like hockey's future. The NHL has worked with technology companies and invested significant money to develop a system it can use. The Olympic men's and women's hockey tournaments are a valuable testing field that could speed up the process of getting it ready for use like it is in the NBA, Major League Baseball, Formula One and other sports.

"We're still searching for the right thing, but technology is developing so fast," International Ice Hockey Federation general secretary Horst Lichtner said. "We are still all looking for the right solution. Maybe it's two years. It'll be fast."

Lichtner and Alain Zobrist, CEO of Omega Timing, which is doing the tracking in hockey and ski jumping thanks to a deal with the International Olympic Committee, said their organizations have been in contact with the NHL about the technology.

The system includes microchips in the back of jerseys that can be tracked and cameras high above the ice at the Gangneung and Kwandong hockey arenas track the movement of the puck.

It's not quite Fox's famous "glow puck" from the 1990s, but it's similar to the testing the NHL did at 2015 All-Star weekend and the 2016 World Cup of Hockey. Omega gave the same combination of technology a run-through at the 2016 Youth Winter Olympics in Norway, and it was successful enough to try it with pros.

At the Olympics, a player's speed is sometimes flashed up on arena video boards and all the data is sent to teams. Unlike the NHL, iPads and other electronic devices aren't allowed on benches in international play, but if and when they are, the data could be available in real time for coaches and players to evaluate.

"We're able to measure the data, process it and distribute in less than 100 milliseconds," Zobrist said. "It might be a great tool for them to help their coaching."

Player performance tracking is a touchy subject off the ice. Players have expressed concern that data on speed, distance traveled, shot velocity and other things could be used against them in coaching decisions and contract negotiations.

"It's just all cons," said former NHL defenseman James Wisniewski, who's playing for the United States. "There's nothing pros for a player for that at all. It's not like you're going to make more money, get a longer-term deal because you travel more distance or you don't travel. All this is going to do is hurt you. Being a (NHL Players' Association) rep for eight, nine years, I really have a hard time believing that the PA's going to even let that go through. It's all negative."

Osala enjoys real-time data he gets as a golf fan and considers it a useful tool for athletes.

"I kind of understand how the pros approach their game and I think it's pretty cool how you can develop your game after you made a deep analysis of your performance in a long span," said Osala, who played three NHL games with the Washington Capitals and Carolina Hurricanes. "For me as a fan, it makes the game so much more interesting. Absolutely as a fan I would love to have the data in hockey."

It would be fascinating to see how fast Connor McDavid skates, how quickly Vladimir Tarasenko releases the puck or how hard Zdeno Chara shoots from the point on the power play. But there are questions about how practical that information is. Lichtner called Formula One's program the "ultimate data experience" because fans know everything, including the G-force on a driver, but said he doesn't think that's important in hockey.

"I don't need to know the G-force of the contact between (Alex Ovechkin) and the other guy if he's strong, but maybe some people would like it," Lichtner said. "I can see a coach having a hundred pages more of information. He might love it, but what is the benefit for the fan?

"I'm asking my people always, 'Why do we do it and what's in it for promoting hockey better?' Make it more complicated? It's already fast and complicated enough. Can you explain the game better? Yes? Then we have a big benefit."

During the U.S. game against Slovenia, Brian O'Neill's maximum speed was posted on a scoreboard, visual evidence that this is a team that can fly. As much as Wisniewski doesn't see any pluses, teammate Bobby Sanguinetti wondered if it the data can help players understand themselves better.

"It might even help with rest for us," Sanguinetti said. "If you see a guy's logging a lot of minutes and he's traveling a lot of distance, I guess, from the chip, maybe that has some impact."

Finland players joked around about Kukkonen's five sprints, but Osala said he felt the veteran defenseman was one of the best on the ice.

That's the common refrain among players and coaches about advanced stats right now, including Corsi and Fenwick, which measure shot attempts to convey some measure of possession. Once player and puck tracking is perfected and implemented, there could be specific stats on how much time the play was in each zone, similar to time of possession in football.

It seems like just a matter of time until the NHL will track and disperse that information, and Lichtner said the NHL and IIHF are on good terms and will share ideas. He said he doesn't believe this system, which the IIHF only found out about three weeks before the Olympics and worked with Omega and jersey-maker Nike to implement, is the one that will ultimately be in place.

"The future is a mix of chip data and cameras," Lichtner said. "But we have to try it."