Bill and Melinda Gates rethink their work in America as they confront their unsatisfactory track record on schools. 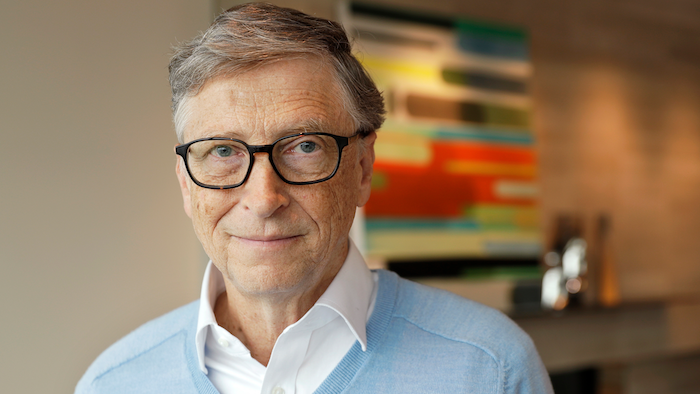 In this Feb. 1, 2018 photo, Microsoft co-founder Bill Gates, with his wife Melinda, poses for a photo before an interview with The Associated Press in Kirkland, Wash. The Gateses, as the world's top philanthropists, are rethinking their work in America as they confront what they consider their unsatisfactory track record on schools, the country's growing inequity and a president they disagree with more than any other.
AP Photo/Ted S. Warren

KIRKLAND, Wash. (AP) — Bill and Melinda Gates, as the world's top philanthropists, are rethinking their work in America as they confront what they consider their unsatisfactory track record on schools, the country's growing inequity and a president they disagree with more than any other.

In an interview with The Associated Press, the couple said they're concerned about President Donald Trump's "America first" worldview. They've made known their differences with the president and his party on issues including foreign aid, taxes and protections for immigrant youth in the country illegally.

And they said they're now digging into the layers of U.S. poverty that they haven't been deeply involved with at the national level, including employment, race, housing, mental health, incarceration and substance abuse.

"We are not seeing the mobility out of poverty in the same way in the United States as it used to exist," Melinda Gates said.

The Bill and Melinda Gates Foundation is studying these topics with no plans yet for any particular initiatives, though it has done related work at home in Washington state on a much smaller scale. Last year, it funded a grant for the Center on Budget and Policy Priorities to look into state and federal policies that can reduce poverty.

Once the world's richest man, Microsoft co-founder Bill Gates has marked a decade since transitioning away from the tech giant to focus on philanthropy. He said he's had two meetings with Trump, where they discussed innovation in education, energy and health — including vaccines, which Trump has voiced skepticism about.

"I got, both times, to talk about the miracle of vaccines and how those are good things," Bill Gates said.

Melinda Gates, who left her job at Microsoft to raise their three children before turning to the foundation full-time, has lately embraced her role as a public figure more boldly. She called out Trump's behavior, saying the president has a responsibility to be a good role model when he speaks and tweets, and that his verbal attacks don't belong in the public discourse.

"You just have to go look in Twitter to see the disparaging comments over and over and over again about women and minorities," Melinda Gates said. "That's just not what I believe. It's not the world that I see."

Trump has said he's a counterpuncher who goes after people when they go after him, only 10 times harder.

Taking a more reflective review of their work than in years past, the couple in their annual letter published Tuesday also answered 10 questions critics often ask them. They acknowledge it's unfair that they have so much wealth and influence but reject the notion that they're imposing their values on other cultures.

"Behind the scenes, these are the tough, tough questions that people are asking us, and yeah, we have to wrestle with them ourselves," Melinda Gates said in the Feb. 1 interview.

Since 2000, the Seattle-based private foundation has amassed an endowment worth over $40 billion, which includes a large portion of billionaire investor Warren Buffett's fortune. The Gates Foundation has given money to various programs in more than 100 countries, as well as in all 50 states and Washington, D.C.

Their approach to giving has shifted the philanthropy world as a whole. They've been criticized for prescribing how the money is spent and then expecting tangible proof their investments work.

About 75 percent of the foundation's resources are dedicated to global health and development. Bill Gates said they're proudest of their efforts to help eradicate polio and curb the number of child deaths, calling those global health improvements a miracle.

But he concedes the same level of progress didn't happen in the U.S. with their strategy of chasing equity through education reform. U.S. education initiatives are a distant second funding priority for the foundation, but the $450 million the Gateses spend annually on the issue makes them the top funders of schools reform in America.

"It's in taking all of those lessons and saying, 'OK, but did they reach the majority of the school districts? Did they scale and change the system for low-income and minority kids writ large, at scale?' And the answer when we looked at it, it was no," Melinda Gates said.

Lubienski, who said he has not sought nor received money from Gates, also noted that by turning their attention to poverty, the Gateses are tackling the "really big elephant in the room" when it comes to student achievement.

"It's also a much bigger, more expensive and politically stickier area to attack than simply changing the structure of schools," Lubienski said.

The Gateses say they're going in a less prescriptive direction on U.S. education by funding efforts through regional networks of schools, which will lean more heavily on educators at the local level. They also intend to support new curriculum development and charters catering to students with special needs.

The foundation will spend $1.7 billion on education over the next five years, as K-12 will remain their primary focus in the U.S. But as they take stock of the country — from the West Coast's growing income gap to the generations of racial inequities in the American South — the Gateses say they're looking at myriad problems that hinder children in the classroom.

"Poverty is like education, where there's not enough philanthropic resources to take on responsibility, but if you can show how to have a lot more impact, then the policies will benefit from that," Bill Gates said.