Reducing the number of tunnels may help the project find funding. 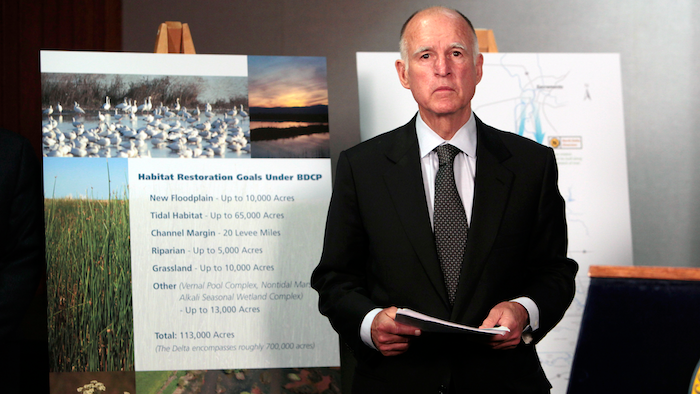 Reducing the number of tunnels — at least for now — would help California's quest to line up enough funding and ease environmental concerns over tapping directly into the state's largest river, officials said.

Supporters also hope the trimmed-down project will have a better chance of winning approval before the 79-year-old governor leaves office in January. The single tunnel still would be California's biggest water project in decades.

The project would pipe water from Northern California's Sacramento River through a four-story-high tunnel dozens of miles long. Los Angeles' giant Metropolitan Water District has been the steadiest long-term supporter of both one tunnel or two, saying they would help secure water for its millions of urban customers.

The new plan marks the latest in Brown's lengthy effort to redo the water system left by his father, the late Gov. Pat Brown.

The original project built by the late Brown has giant pumps that at times changed the direction of the flow of the largest estuary on the West Coast. The outdated mechanics and overall water withdrawals for humans hastened the decline of California's chinook salmon and other native species, environmental groups say.

Jerry Brown has sought to overhaul the state water project since his first terms in office. Californians in 1982 voted down Brown's proposal for a giant canal, rather than tunnels.

Supporters of the tunnels say the new project would help the environment. Opponents fear the project — whether one tunnel or two — could take too much fresh water from the vital waterway.

California water districts had balked at the $16 billion cost of the two tunnels, stalling that version by late last year.

Karla Nemeth, head of the state Department of Water Resources, wrote local water agencies Wednesday that the state would still proceed with a second tunnel if the money is found.

The state put the cost of the single tunnel at $10.7 billion, all to be paid by water districts that use the supply.

"The water agency is stretching to find ways to keep an unpopular and ill-conceived project alive," said Kathryn Phillips, director of the California Sierra Club. "It doesn't have the funding for the tunnels project it claims the state needs, so it just changes the project to fit the money it can find."

Jennifer Pierre, general manager of a group of water contractors that gets supplies from the state water project, said two tunnels remain the goal.

Money for a solo water tunnel "is clearly available now so that we can move forward," Pierre said. "We're not taking our eye off the full project."

Several local water agencies that had refused to join the two-tunnel project, fearing it would cost too much without bringing additional water, already have expressed support in theory for one tunnel.

"It's kinder, gentler," Gary Kremen, a member of the biggest water board for Silicon Valley, the Santa Clara Valley Water District, said of the one-tunnel version. The district was one of the few big ones in Northern California to look hard at joining in the tunnels.