GM says its new truck is up to 450 pounds lighter than the current model. 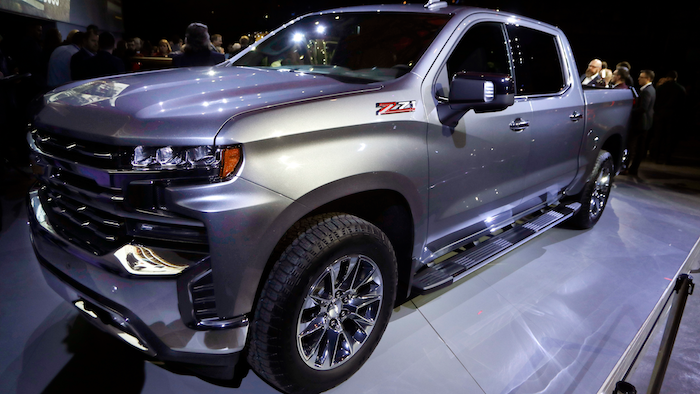 The 2019 Chevrolet Silverado High Country pickup is unveiled, Saturday, Jan. 13, 2018, in Detroit. The Silverado is the second-best selling vehicle in the U.S. and is outsold only by Ford's F-Series pickups. Big pickup truck sales rose nearly 6 percent last year to almost 2.4 million, even though total U.S. auto sales dropped 2 percent. One in every seven vehicles sold last year was a full-size pickup.
AP Photo/Carlos Osorio

DETROIT (AP) — In the world of full-size pickups, it's a race to see who can haul more stuff, yet do it with lighter, more efficient trucks.

General Motors is taking a big step that way with an all-new Chevrolet Silverado unveiled Saturday night ahead of Detroit's big auto show.

The Silverado is the second-best selling vehicle in the U.S. and is outsold only by Ford's F-Series pickups. Big pickup truck sales rose nearly 6 percent last year to almost 2.4 million, even though total U.S. auto sales dropped 2 percent. One in every seven vehicles sold last year was a full-size pickup.

GM says its new truck is up to 450 pounds lighter than the current model. The new Silverado, which goes on sale this fall, slims down by using GM's expertise in melding different metals. Parts that swing, including doors, the hood and the tailgate, are lighter aluminum, but stationery parts such as the bed, are still steel.

GM has used the steel bed in marketing, claiming that it's more durable than rival Ford's bed made of aluminum.

The Silverado's frame weighs 88 pounds less because it's made of lighter yet stronger high-strength steel, GM says. Aluminum parts in the suspension and other areas make up the rest of the weight loss.

The new truck is just under 2 inches longer than the old one for more space in the cargo bed and a roomier interior.

Alan Batey, GM's head of North America, said Chevy will offer eight different configurations of the truck from basic work models to well-equipped off-road and luxury versions so they can be personalized.

"People see it as their truck, not the truck that everybody has," he said.

It also gets two new V-8 engines — 5.3-liters and 6.2-liters — that can shut off any number of cylinders to save gas, yet have "instant power" available when needed. There's also a new 3-liter six-cylinder diesel and a 10-speed automatic transmission available. GM wouldn't say if any other engines would be offered, including a V6 gas engine that's now available.

Designers and engineers paid particular attention to aerodynamics for better fuel economy, GM said. The sides of a mean-looking front grille direct air around the front wheel wells to reduce wind drag, and there's a spoiler at the back of the cab roof to steer air over the bed.

The company wouldn't release the weight or estimated fuel economy, but said the 450-pound weight loss is on a crew cab model with a V8 engine. The current crew cab with a 6.2-Liter V8 gets 15 mpg in the city and 20 on the highway.

The truck also has 21 fixed and moveable tie-down points to secure cargo, and a power tailgate is available. Cutouts in the bumper that let drivers step into the bed are larger to accommodate steel-toe boots.

GM said it would release the price closer to when the new truck arrives in showrooms.