Honda's funky two-door Insight hybrid came out in 1999 and got 70 miles per gallon on the highway.

Associated Press
This photo provided by Honda shows the Honda Insight prototype, a new five-passenger gas-electric hybrid sedan which the automaker says it will unveil at the Detroit auto show in January 2018.
Courtesy of Honda via AP

The company says it's bringing back the Insight name for the compact car that will offer mileage competitive with other hybrids. Fuel economy and price weren't released Tuesday for the car that will be in U.S. showrooms next summer.

The Edmunds.com auto buying site is predicting that sales of electric and hybrid cars will hit record numbers in the U.S. next year. The website says fully electric vehicles, plug-in rechargeable hybrids and traditional gas-electric hybrids will make up 4.4 percent of the market. That's up from an estimated 3.2 percent this year.

Edmunds expects automakers to sell 17.2 million new vehicles this year and says that will fall to 16.8 million next year. Most of the sales will be driven by gas-powered trucks and SUVs. The company predicts that cars will fall to a record low of 34.5 percent of the U.S. market next year.

Honda's funky two-door Insight hybrid came out in 1999 and got 70 miles per gallon on the highway.

But the company the new version will have four doors and use a two-motor hybrid system. It will have premium features and performance for mainstream car buyers. It's part of the brand's promise to make two-thirds of its global vehicles at least partly electric by 2030.

A prototype will be shown at Detroit's North American International Auto Show.

It's expected to have competitive gas mileage with Toyota's Prius, which now gets 52 miles per gallon in combined city and highway driving. 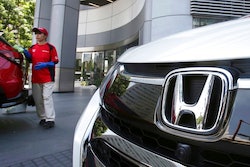