A maximum of nine "autonomous delivery devices" may be allowed at any time in the city. 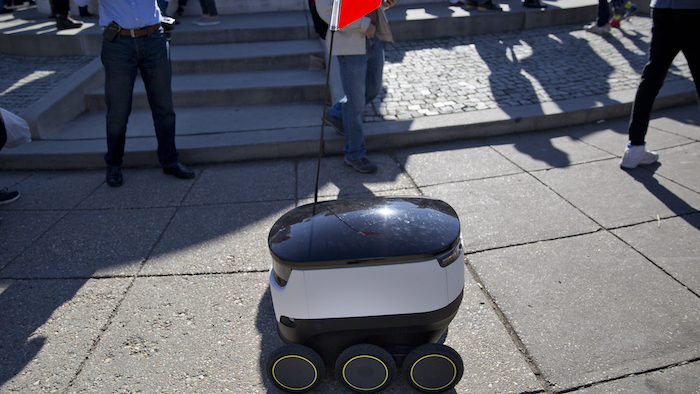 In this Feb. 20, 2017, file photo, a six-wheeled ground delivery robot, from Starship Technologies, shares the sidewalk with pedestrians at DuPont Circle in Washington, D.C. Delivery robots in San Francisco will need permits before they can roam city sidewalks under legislation approved by supervisors on Tuesday, Dec. 5, 2017.
AP Photo/Pablo Martinez Monsivais, file

SAN FRANCISCO (AP) — Delivery robots in San Francisco will need permits before they can roam city sidewalks under legislation approved by city supervisors.

Supervisor Norman Yee proposed an outright ban on delivery robots but settled on a permitting system. The supervisors approved it Tuesday.

A maximum of nine "autonomous delivery devices" may be allowed at any time in the city.

The robots can't go more than 3 miles per hour (4.8 kilometers per hour) and human operators must be nearby. The robots must yield to pedestrians.

Other cities have taken similar steps.

GM Wants You to Order Wings While You Drive