Trump administration sets aside plans to require new cars to be able to wirelessly talk to each other. 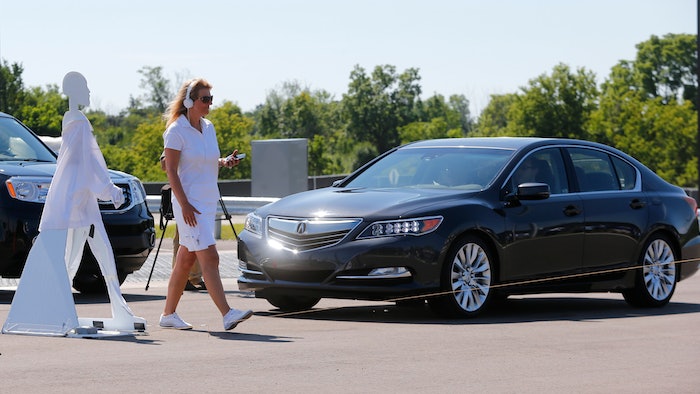 The Trump administration has quietly set aside plans to require new cars to be able to wirelessly talk to each other, auto industry officials said, jeopardizing one of the most promising technologies for preventing traffic deaths.
AP Photo/Paul Sancya, File

WASHINGTON (AP) — The Trump administration has quietly set aside plans to require new cars to be able to wirelessly talk to each other, auto industry officials said, jeopardizing one of the most promising technologies for preventing traffic deaths.

The Obama administration proposed last December that all new cars and light trucks come equipped with technology known as vehicle-to-vehicle communications, or V2V. It would enable vehicles to transmit their location, speed, direction and other information 10 times per second. That lets cars detect, for example, when another vehicle is about to run a red light or coming around a blind turn in time to prevent a crash.

The White House and the Department of Transportation declined to comment, but the proposal has been dropped from the White House Office of Management and Budget's list of regulations actively under consideration and instead has been relegated to its long-term agenda.

The National Highway Traffic Safety Administration, which is part of the Transportation Department, said in a statement that it is still reviewing more than 460 comments on the proposed mandate before deciding its next step and that no final decision has been made. Industry officials said decisions on the matter are being made at higher levels of the administration.

Administration officials indicated their decision was based on several factors, including general wariness of imposing costly mandates on industry, even though most automakers support requiring V2V, industry officials said. President Donald Trump has made reducing government regulations, which he sees as a drain on the economy, a guiding principle of his administration.

The Transportation Department estimates the technology has the potential to prevent or reduce the severity of up to 80 percent of collisions that don't involve alcohol or drugs. V2V was also expected to provide an extra layer of safety for self-driving cars since it can detect even vehicles hidden by buildings or beyond the range of the sensors and cameras of autonomous vehicles. And it was expected to ease traffic congestion since vehicles could communicate with traffic signals, turning them green to prevent needless waiting, save fuel and reduce emissions.

V2V is one of the "most important tools" for reducing traffic fatalities, but the Trump administration "is locking it in the trunk if they're not going to put out the mandate," said Deborah Hersman, president of the National Safety Council, a congressionally chartered advocacy group. "The only way you're going to get it adopted and deployed in a widespread manner is by having a mandate."

The Obama administration shares some of the blame because it waited years to propose the mandate, she said.

Another reason administration officials are allowing the V2V proposal to languish is strong opposition from the cable and tech industries, auto industry officials said.

The government set aside the 5.9 GHz spectrum band for transportation technologies in 1999. It went unused while the government and automakers spent over a decade and more than $1 billion developing and testing V2V.

The Federal Communications Commission has been conducting tests to see if the spectrum can be shared without interfering with the safety signals. The first test results are expected to be released soon.

Automakers wanted the mandate partly because it would establish V2V protocols to ensure that Fords could talk to Toyotas which could talk to Volkswagens, and so on.

The mandate was also intended to get the technology onto roads faster. It called for half of new vehicles to have V2V within two years after a final rule was issued, and all new vehicles within four years. The more vehicles equipped with V2V, the more collisions that could be avoided. It would still take many years before there were enough vehicles with V2V to reap the technology's full promise. That might be accelerated by after-market devices that would bring V2V to older vehicles.

Automakers can put V2V in vehicles without a mandate. General Motors has put the technology in its Cadillac CTS sedans. Toyota has put V2V in vehicles in Japan and Volkswagen plans to put it in cars in Europe starting in 2019. But it will be more difficult for automakers to protect the 5.9 GHz spectrum and deployment will be far slower without a mandate, industry officials said.

Some European manufacturers say they want V2V, but it might be better to wait super-fast 5G cellular technology to achieve it instead of currently available technology. But 5G is still being developed. Years of testing would be required after it's ready before it could go into cars.

"The longer we wait, the more people die," said Kirk Steudle, director of the Michigan Department of Transportation. "We need to move forward with it."