The new system is an attempt to end the company's history of losses. 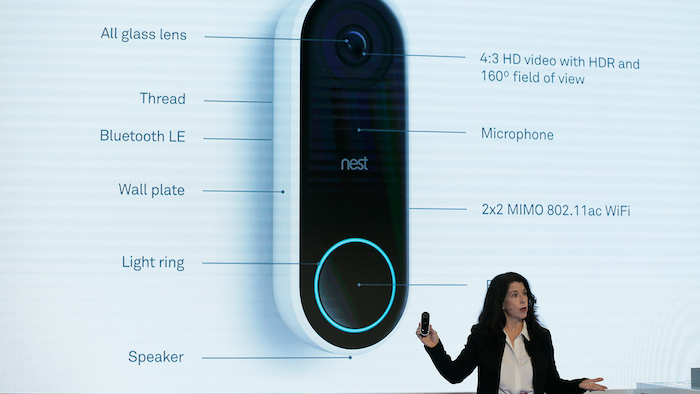 Michelle Turner, general manager of security products for Nest Labs, talks about the Hello doorbell during an event Wednesday, Sept. 20, 2017, in San Francisco. Home device maker Nest Labs is adding Google's facial recognition technology to a camera-equipped doorbell and rolling out a security system in an attempt to end its history of losses. The products announced Wednesday expand upon the internet-connected thermostats, smoke detectors and stand-alone security cameras that Nest has been selling since its inception six years ago.
AP Photo/Eric Risberg

SAN FRANCISCO (AP) — Home device maker Nest Labs is adding Google's facial recognition technology to a camera-equipped doorbell and rolling out a security system in an attempt to end its history of losses (view photos in gallery).

The products announced Wednesday expand upon the internet-connected thermostats, smoke detectors and stand-alone security cameras that Nest has been selling since its inception six years ago.

Although Nest has been among the early leaders in the effort to make home appliances as intelligent as people's smartphones, it hasn't been able to make money to the frustration of its corporate parent, Alphabet. In an attempt to shake things up, Alphabet brought in cable industry veteran Marwan Fawaz to replace Nest founder Tony Fadell as CEO after Fadell stepped down 15 months ago.

Nest had been supplementing its existing product line with slightly different choices until Wednesday's move into entirely new categories.

The Hello doorbell comes with a built-in video camera and speakers that will make it seem like it can recognize and talk to people.

The doorbell will draw upon Google's facial recognition technology so it can warn a home's occupants when a stranger approaches. Google bought Nest for $3.2 billion in 2014 and then spun it off after it hatched Alphabet as its parent company.

Nest is now lumped into a group of risky companies venturing into new areas of technology that have collectively lost $10.6 billion during the past three-and-half years alone. Alphabet hasn't disclosed how much Nest has contributed to it the losses in its "Other Bets" segment

Nest isn't announcing a price for its new doorbell until it hits the market sometime during the first three months of next year.

Apple is implanting a different form of facial recognition into its $1,000 iPhone X to unlock the device, telegraphing a future where cameras increasingly are going to be able to identify people within its lens' range. The new phone will be released in November.

Nest's usage of facial recognition hasn't yet sparked privacy concerns because it doesn't tap into Google's vast database of photos to automatically recognize people. Instead, a user of the Nest camera or doorbell must manually tag and name people before the device recognizes someone.

The Nest home security system is being billed as a simpler and more convenient way to protect a home than the alarms and other kinds of sensors that have long been sold by other vendors. Nest's "Secure" system will sell for $499 for its basic toolkit of devices.