They have lived in a small habitat on a remote Hawaiian volcano since January. 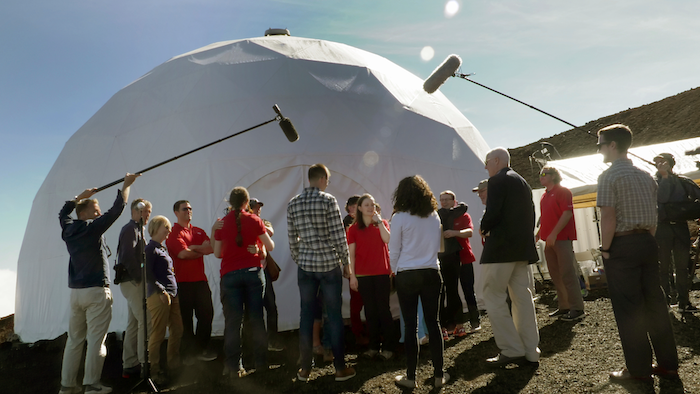 This photo released by the University of Hawaii shows Hawaii Space Exploration Analog and Simulation, HI-SEAS crew members emerging from their habitat on Sunday, Sept. 17, 2017, after eight months of living in isolation in a Mars-like habitat in Mauna Loa volcano, Big Island, Hawaii. The six NASA-backed research subjects were studied by researchers to understand better the psychological impacts of a long-term manned mission to space would have on astronauts. NASA hopes to send humans to Mars by the 2030s.
HI-SEAS V crew/University of Hawaii via AP

HONOLULU (AP) — Six NASA-backed research subjects who have been cooped up in a Mars-like habitat on a remote Hawaii volcano since January emerged from isolation Sunday. They devoured fresh-picked tropical fruits and fluffy egg strata after eating mostly freeze-dried food while in isolation and some vegetables they grew during their mission (view photos in gallery).

The crew of four men and two women are part of a study designed to better understand the psychological impacts a long-term space mission would have on astronauts.

The data they produced will help NASA select individuals and groups with the right mix of traits to best cope with the stress, isolation and danger of a two-to-three year trip to Mars. The U.S. space agency hopes to send humans to the red planet by the 2030s.

The crew was quarantined for eight months on a vast plain below the summit of the Big Island's Mauna Loa, the world's largest active volcano. After finishing their stint, they feasted on pineapple, mango and papaya.

While isolated, the crew members wore space suits and travelled in teams whenever they left their small dome living structure. They ate mostly freeze-dried or canned food on their simulated voyage to Mars.

All of their communications with the outside world were subjected to a 20-minute delay — the time it takes for signals to get from Mars to Earth. The crew was tasked with conducting geological surveys, mapping studies and maintaining their self-sufficient habitat as if they were actually living on Mars.

The team's information technology specialist, Laura Lark, thinks a manned voyage to Mars is a reasonable goal for NASA. The project is the fifth in a series of six NASA-funded studies at the University of Hawaii facility called the Hawaii Space Exploration Analog and Simulation, or HI-SEAS. NASA has dedicated about $2.5 million for research at the facility.

"There are certainly human factors to be figured out, that's part of what HI-SEAS is for," Lark said in a video message recorded within the dome. "But I think that overcoming those challenges is just a matter of effort. We are absolutely capable of it."

The crew played games designed to measure their compatibility and stress levels and maintained logs about how they were feeling.

To gauge their moods they also wore specially-designed sensors that measured voice levels and proximity to other people in the, 1,200 square-foot (111-square meter) living space.

The devices could sense if people were avoiding one another, or if they were "toe-to-toe" in an argument, said the project's lead investigator, University of Hawaii professor Kim Binsted.

"We've learned, for one thing, that conflict, even in the best of teams, is going to arise," Binsted said. "So what's really important is to have a crew that, both as individuals and a group, is really resilient, is able to look at that conflict and come back from it."

The study also tested ways to help the crew cope with stress. When they became overwhelmed, they could use virtual reality devices to take them away to a tropical beach or other familiar landscapes.

Other Mars simulation projects exist around the world, but Hawaii researchers say one of the chief advantages of their project is the area's rugged, Mars-like landscape, on a rocky, red plain below the summit of Mauna Loa.

The crew's vinyl-covered shelter is about the size of a small two-bedroom home, has small sleeping quarters for each member plus a kitchen, laboratory and bathroom. The group shared one shower and has two composting toilets.