The bill gives the federal government authority to exempt automakers from safety standards not applicable to the technology. 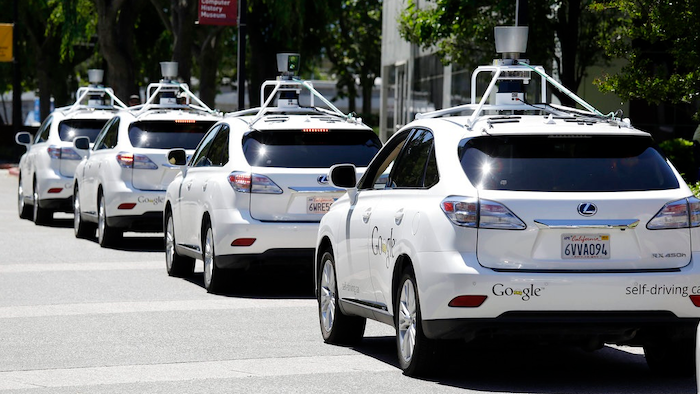 This May 13, 2014, file photo shows a row of Google self-driving Lexus cars at a Google event outside the Computer History Museum in Mountain View, Calif. The House voted Wednesday, Sept. 6, 2017, to speed the introduction of self-driving cars by giving the federal government authority to exempt automakers from safety standards not applicable to the technology, and to permit deployment of up to 100,000 of the vehicles annually over the next several years.
AP Photo/Eric Risberg, File

WASHINGTON (AP) — The House voted Wednesday to speed the introduction of self-driving cars by giving the federal government authority to exempt automakers from safety standards not applicable to the technology, and to permit deployment of up to 100,000 of the vehicles annually over the next several years.

The bill was passed by a voice vote. State and local officials have raised concern that it limits their ability to protect the safety of their citizens by giving to the federal government sole authority to regulate the vehicles' design and performance. States would still decide whether to permit self-driving cars on their roads. Generally, the federal government regulates the vehicle, while states regulate the driver.

Automakers have complained that a patchwork of laws states have passed in recent years would hamper deployment of the vehicles, which they see as the future of the industry. Self-driving cars are forecast to dramatically lower traffic fatalities once they are on roads in significant numbers, among other benefits. Early estimates indicate there were more than 40,000 traffic fatalities last year. The National Highway Traffic Safety Administration says 94 percent of crashes involve human error.

Members of the Senate Commerce committee are also working on self-driving car legislation, but a bill hasn't been introduced. If a measure passes the full Senate, the two versions would have to be reconciled before President Donald Trump could sign it into law.

The House bill is the product of extensive negotiations between Democrats and Republicans, a rare of example of bipartisan agreement in a Congress riven by political and ideological differences.

The measure "gives the auto industry the tools to revolutionize how we're going to get around for generations to come," said Rep. Fred Upton, a Michigan Republican.

Rep. Debbie Dingell, a Michigan Democrat, said the bill "is fundamentally an issue of American competitiveness" since foreign automakers are developing self-driving cars as well.

The bill addresses "a variety of barriers that otherwise block the ability to safely test and deploy these vehicle technologies," the Alliance of Automobile Manufacturers said in a statement.

The bill permits the deployment of up to 25,000 self-driving vehicles in its first year, rising to 100,000 vehicles annually in the third year.

But consumer and safety groups say they remain concerned the bill will weaken safety standards and undermine public acceptance of the vehicles if a defect led to crashes and fatalities.

"Exposing motorists to the dangers of crashes without proven and needed protections is a wanton disregard for public health and safety," the groups said.

The bill doesn't apply to commercial vehicles, which were carved out after labor unions expressed concern that self-driving trucks would eliminate jobs.