For Tesla, everything is riding on the Model 3. 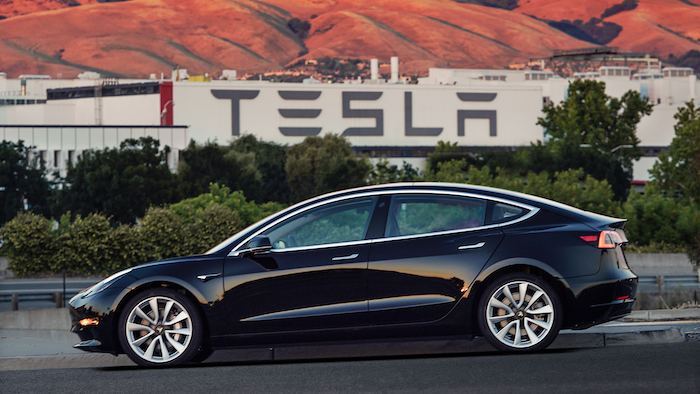 This undated image provided by Tesla Motors shows the Tesla Model 3 sedan. The electric car company’s newest vehicle, the Model 3, which set to go to its first 30 customers Friday, July 28, 2017, is half the cost of previous models. Its $35,000 starting price and 215-mile range could bring hundreds of thousands of customers into Tesla’s fold, taking it from a niche luxury brand to the mainstream.
Tesla Motors

FREMONT, Calif. (AP) — The electric car company's newest vehicle is set to go to its first 30 customers Friday evening. Its $35,000 starting price — half the cost of Tesla's previous models — and 215-mile range could bring hundreds of thousands of customers into the automaker's fold, taking it from a niche luxury brand to the mainstream.

Those higher sales could finally make Tesla profitable and accelerate its plans for future products like SUVs and pickup trucks.

Or the Model 3 could dash Tesla's dreams.

Potential customers could lose faith if Tesla doesn't meet its aggressive production schedule, or if the cars have quality problems that strain Tesla's small service network. The compact Model 3 may not entice a global market that's increasingly shifting to SUVs, including all-electric SUVs from Audi and others that are going on sale soon.

Limits on the $7,500 U.S. tax credit for electric cars could also hurt demand. Once an automaker sells 200,000 electric cars in the U.S., the credit phases out. Tesla has already sold more than 126,000 vehicles since 2008, according to estimates by WardsAuto, so not everyone who buys a Model 3 will be eligible.

"There are more reasons to think that it won't be successful than it will," says Karl Brauer, the executive publisher for Cox Automotive, which owns Autotrader and other car buying sites.

The Model 3 has long been part of Palo Alto, California-based Tesla's plans. In 2006 — three years after the company was founded — CEO Elon Musk said Tesla would eventually build "affordably priced family cars" after establishing itself with high-end vehicles like the Model S, which starts at $69,500. This will be the first time many Tesla workers will be able to afford a Tesla.

Tesla started taking reservations for the Model 3 in March 2016. Within a month, 373,000 customers had put down a $1,000 refundable deposit. Since then, Tesla has refused to say how many people have reserved a Model 3, but its website says people making reservations now should expect to get their car in the middle of 2018.

Lisa Gingerich, a Milwaukee-based attorney, reserved a Model 3 within minutes of the order bank's opening. She doesn't know when she'll get to choose from the limited number of options, including color and wheel size, or when her car will arrive. She's borrowing a friend's Chevrolet Volt plug-in hybrid while she waits.

Gingerich thought about getting a Model S, but found it too expensive and flashy for the charities she often works with. She could get an all-electric Chevrolet Bolt, which is the same price as the Model 3 and has more range. But she wants access to Tesla's fast-charging Supercharger stations, which are strategically placed along U.S. highways.

"It's kind of like organic food. The more people buy it, the more it becomes accessible for everybody," Gingerich says.

But car-making has proved a challenge to Musk. Both the Model S and the Model X SUV were delayed and then plagued with pesky problems, like doors that don't work and blank screens in their high-tech dashboards.

Tesla's luxury car owners might overlook those problems because they liked the thrill of being early adopters. But mainstream buyers will be less forgiving.

"This will be their primary vehicle, so they will have high expectations of quality and durability and expect everything to work every time," said Sam Abuelsamid, a senior researcher with Navigant Research.

The Model 3 was designed to be much simpler to make than Tesla's previous vehicles. But already it doesn't appear to be sticking to its schedule. Musk said earlier this month Tesla should be making 20,000 Model 3s per month by December; that's half the number of his previous estimates.

Musk aims to make 500,000 vehicles next year at Tesla's Fremont factory, a number that could help Tesla finally make money. The company has only had two profitable quarters since it went public in 2010. But even at that pace, Tesla will remain a small player. Toyota Motor Corp. made more than 10 million vehicles last year.

Abuelsamid said even if it doesn't meet its ambitious targets, Tesla has done more than anyone to promote electric vehicles.

"A decade ago they were a little more than golf carts. Now all of a sudden, EVs are real, practical vehicles that can be used for anything," he said.