How tiny indentations can benefit the crystals in concrete. 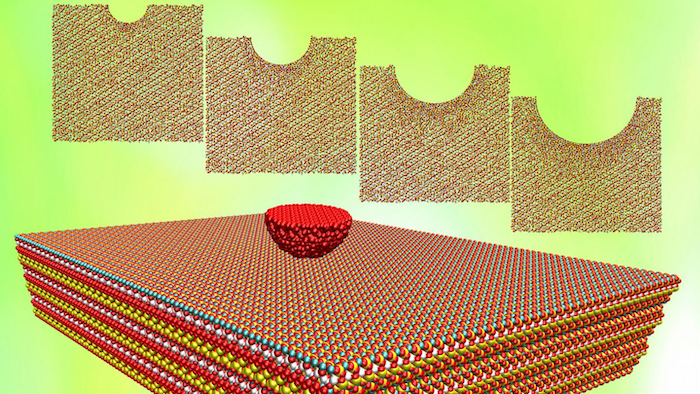 Indented tobermorite, a natural analog to the calcium-silicate-hydrate mix in cement, responds differently than bulk tobermorite, depending on the size of the indentation and the force. Layers that bond through indentation remain that way after the force is removed, according to Rice University engineers.
Lei Ren/Rice University

Rice University scientists have determined that no matter how large or small a piece of tobermorite is, it will respond to loading forces in precisely the same way. But poking it with a sharp point will change its strength.

Tobermorite is a naturally occurring crystalline analog to the calcium-silicate-hydrate (C-S-H) that makes up cement, which in turn binds concrete, the world's most-used material. A form of tobermorite used by ancient Romans is believed to be a key to the legendary strength of their undersea concrete structures.

The finely layered material will deform in different ways depending on how standard forces -- shear, compression and tension -- are applied, but the deformation will be consistent among sample sizes, according to Rice materials scientist Rouzbeh Shahsavari. He conducted the research, which appears in Nature's open-access Scientific Reports, with lead author and graduate student Lei Tao.

For their latest survey, Shahsavari and Tao built molecular dynamics models of the material. Their simulations revealed three key molecular mechanisms at work in tobermorite that are also likely responsible for the strength of C-S-H and other layered materials.

One is a mechanism of displacement in which atoms under stress move collectively as they try to stay in equilibrium. Another is a diffusive mechanism in which atoms move more chaotically. They found that the material maintains its structural integrity best under shear, and less so under compressive and then tensile loading.

More interesting to the researchers was the third mechanism, by which bonds between the layers were formed when pressing a nanoindenter into the material. A nanoindenter is a device (simulated in this case) used to test the hardness of very small volumes of materials.

The high stress at the point of indentation prompted local phase transformations in which the crystalline structure of the material deformed and created strong bonds between the layers, a phenomenon not observed under standard forces. The strength of the bond depended on both the amount of force and, unlike the macroscale stressors, the size of the tip.

"There is significant stress right below the small tip of the nanoindenter," Shahsavari said. "That connects the neighboring layers. Once you remove the tip, the structure does not go back to the original configuration. That's important: These transformations are irreversible.

"Besides providing fundamental understanding on key deformation mechanisms, this work uncovers the true mechanical response of the system under small localized (versus conventional) loads, such as nanoindentation," he said. "If changing the tip size (and thus the internal topology) is going to alter the mechanics -- for example, make the material stronger -- then one might use this feature to better design the system for particular localized loads."

Shahsavari is an assistant professor of civil and environmental engineering and of materials science and nanoengineering.

The National Science Foundation (NSF) supported the research. Computing resources were supplied by the National Institutes of Health and an IBM Shared University Research award in partnership with CISCO, Qlogic and Adaptive Computing and Rice's NSF-supported DAVinCI supercomputer administered by Rice's Center for Research Computing; the resources were procured in partnership with Rice's Ken Kennedy Institute for Information Technology.

A New Formula for Concrete