The accident occurred near Cape Canaveral, Florida, as the satellite was being packed for launch. 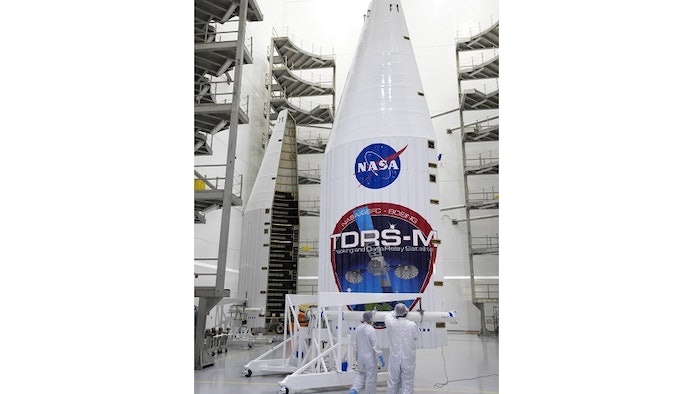 In a July 13, 2017 photo provided by NASA, the payload fairing for NASA's Tracking and Data Relay Satellite, TDRS-M, is inspected prior to encapsulating the spacecraft, inside the Astrotech facility in Titusville, Fla. NASA said Monday, July 17, 2017, that one of the antennas on the Tracking and Data Relay Satellite, was damaged last Friday. The mishap could delay what was supposed to be an Aug. 3 liftoff aboard an Atlas V (five) rocket.
Glenn Benson/NASA via AP

NASA said Monday that one of the antennas on the Tracking and Data Relay Satellite, or TDRS-M (T-driss-M), was damaged last Friday. The accident occurred inside a payload processing building near Cape Canaveral, Florida, as the satellite was being packed for launch.

Officials are providing no details. But the mishap could delay what was supposed to be an Aug. 3 liftoff aboard an Atlas V (five) rocket. In a brief statement, NASA says the mission team is assessing the damage and flight schedule.

TDRS-M is the third-generation in this satellite series. The orbiting network links ground controllers with the International Space Station, the Hubble Space Telescope and other spacecraft.

NASA Camera a Gift that Keeps on Giving