Practically 40 percent of the electrical energy going into computers dissipates as heat. 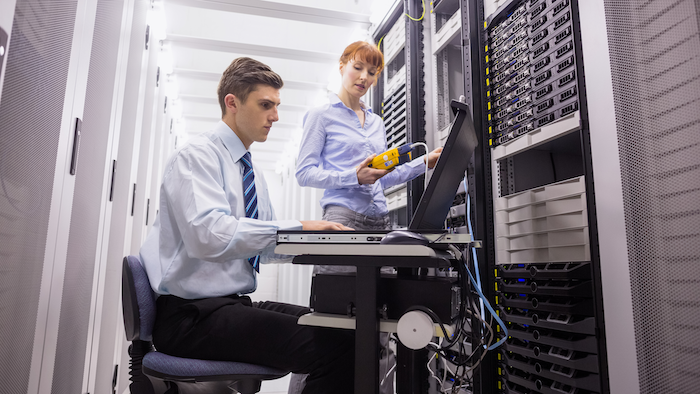 In order to store information in the conventional magnetic memories of electronic devices, the materials' small magnetic domains work by pointing up or down according to the magnetic fields. To generate these fields it is necessary to produce electric currents, but these currents heat up materials and a large amount of energy is spent cooling them. Practically 40 percent of the electrical energy going into computers (or "Big Data" servers) dissipates as heat.

In 2007, French scientists observed that when the magnetic materials are put into ultra-thin layers and voltage is applied, the amount of current and energy needed to point the magnetic domains was reduced by four percent. However, this slight reduction was not significant enough to be applied to devices.

A research team directed by Jordi Sort, ICREA researcher and lecturer of the Department of Physics at the Universitat Autònoma de Barcelona, with the collaboration of the Catalan Institute for Nanoscience and Nanotechnology (ICN2), has searched for a solution based on the magnetic properties of a new nanoporous material which could increase this surface.

The new material, which is featured this week in the Advanced Functional Materials journal, consists in nanoporous copper and nickel alloy films, organized in a way that the interior forms surfaces and holes similar to that of the inside of a sponge, but with a separation between pores of only five or 10 nanometers. In other words, the walls of the pores contain enough room for only a few dozen atoms.

"There are many researchers applying nanoporous materials to improve physical-chemical processes, such as in the development of new sensors, but we studied what these materials could provide to electromagnetism", Jordi Sort explains. "The nanopores found on the inside of nanoporous materials offer a great amount of surface.

"With this vast surface concentrated in a very small space we can apply the voltage of a battery and enormously reduce the energy needed to orientate the magnetic domains and record data. This represents a new paradigm in the energy saving of computers and in computing and handling magnetic data in general", says Jordi Sort.

UAB researchers have built the first prototypes of nanoporous magnetic memories based on copper and nickel alloys (CuNi) and have reached very satisfactory results, with a reduction of 35 percent in magnetic coercivity, a magnitude related to the energy consumption needed to re-orientate the magnetic domains and record data.

In these first prototypes, researchers applied the voltage using liquid electrolytes, but are now working on solid materials which could help implement the devices in the market. According to Jordi Sort, "Implementing this material into the memories of computers and mobile devices can offer many advantages, mainly in direct energy saving for computers and considerable increase in the autonomy of mobile devices".

The development of new nanoelectronic devices with improved energy efficiency is one of the strategic lines included in the European Union's Horizon 2020 program. According to some estimations, if electric current is completely substituted by voltage in data processing systems, energy costs can be reduced by a factor of 1/500.

In fact, computer servers of large companies such as Google and Facebook are located underwater, or in Nordic countries in which temperatures are very low, with the aim of reducing heating and energy consumption.