Immune therapy is the hottest trend in cancer care — creating "living drugs" that grow inside the body into an army that seeks and destroys tumors. 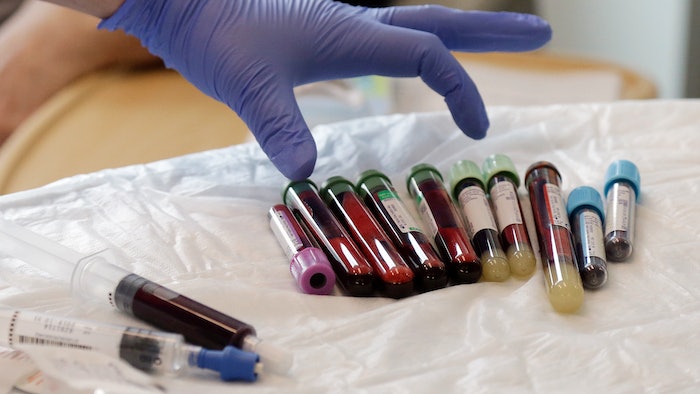 In this photo taken March 21, 2017, a nurse reaches for blood samples taken from a patient receiving a kind of immunotherapy known as CAR-T cell therapy at the Fred Hutchinson Cancer Research Center in Seattle. Immune therapy is the hottest trend in cancer care and its next frontier is creating "living drugs" that grow inside the body into an army that seeks and destroys tumors.
AP Photo/Elaine Thompson

SEATTLE (AP) — Ken Shefveland's body was swollen with cancer, treatment after treatment failing until doctors gambled on a radical approach: They removed some of his immune cells, engineered them into cancer assassins and unleashed them into his bloodstream.

Immune therapy is the hottest trend in cancer care and this is its next frontier — creating "living drugs" that grow inside the body into an army that seeks and destroys tumors.

Looking in the mirror, Shefveland saw "the cancer was just melting away." A month later doctors at the Fred Hutchinson Cancer Research Center couldn't find any signs of lymphoma in the Vancouver, Washington, man's body.

"Today I find out I'm in full remission — how wonderful is that?" said Shefveland with a wide grin, giving his physician a quick embrace.

This experimental therapy marks an entirely new way to treat cancer — if scientists can make it work, safely. Early-stage studies are stirring hope as one-time infusions of supercharged immune cells help a remarkable number of patients with intractable leukemia or lymphoma.

T cells are key immune system soldiers. But cancer can be hard for them to spot, and can put the brakes on an immune attack. Today's popular immunotherapy drugs called "checkpoint inhibitors" release one brake so nearby T cells can strike. The new cellular immunotherapy approach aims to be more potent: Give patients stronger T cells to begin with.

Currently available only in studies at major cancer centers, the first CAR-T cell therapies for a few blood cancers could hit the market later this year. The Food and Drug Administration is evaluating one version developed by the University of Pennsylvania and licensed to Novartis, and another created by the National Cancer Institute and licensed to Kite Pharma.

CAR-T therapy "feels very much like it's ready for prime time" for advanced blood cancers, said Dr. Nick Haining of the Dana-Farber Cancer Institute and Broad Institute of MIT and Harvard, who isn't involved in the development.

"There's a desperate need," said NCI immunotherapy pioneer Dr. Steven Rosenberg, pointing to queries from hundreds of patients for studies that accept only a few.

For all the excitement, there are formidable challenges.

Scientists still are unraveling why these living cancer drugs work for some people and not others.

Doctors must learn to manage potentially life-threatening side effects from an overstimulated immune system. Also concerning is a small number of deaths from brain swelling, an unexplained complication that forced another company, Juno Therapeutics, to halt development of one CAR-T in its pipeline; Kite recently reported a death, too.

And, made from scratch for every patient using their own blood, this is one of the most customized therapies ever and could cost hundreds of thousands of dollars.

"It's a Model A Ford and we need a Lamborghini," said CAR-T researcher Dr. Renier Brentjens of New York's Memorial Sloan Kettering Cancer Center, which, like Hutch, has a partnership with Juno.

In Seattle, Fred Hutch offered a behind-the-scenes peek at research underway to tackle those challenges. At a recently opened immunotherapy clinic, scientists are taking newly designed T cells from the lab to the patient and back again to tease out what works best.

"We can essentially make a cell do things it wasn't programmed to do naturally," explained immunology chief Dr. Philip Greenberg. "Your imagination can run wild with how you can engineer cells to function better."

The first step is much like donating blood. When leukemia patient Claude Bannick entered a Hutch CAR-T study in 2014, nurses hooked him to a machine that filtered out his white blood cells, including the T cells.

Technicians raced his bag of cells to a factory-like facility that's kept so sterile they must pull on germ-deflecting suits, booties and masks just to enter. Then came 14 days of wait and worry, as his cells were reprogrammed.

Bannick, 67, says he "was almost dead." Chemotherapy, experimental drugs, even a bone marrow transplant had failed, and "I was willing to try anything."

The goal: Arm T cells with an artificial receptor, a tracking system that can zero in on identifying markers of cancer cells, known as antigens. For many leukemias and lymphomas, that's an antigen named CD19.

Every research group has its own recipe but generally, scientists infect T cells with an inactive virus carrying genetic instructions to grow the desired "chimeric antigen receptor." That CAR will bind to its target cancer cells and rev up for attack.

Millions of copies of engineered cells are grown in incubators, Hutch technicians pulling out precious batches to monitor if they're ready for waiting patients.

If they work, those cells will keep multiplying in the body. If they don't, the doctors send blood and other samples back to researchers like Riddell to figure out why.

Small, early studies in the U.S. made headlines as 60 percent to 90 percent of patients trying CAR-Ts as a last resort for leukemia or lymphoma saw their cancer rapidly decrease or even become undetectable. Last week, Chinese researchers reported similar early findings as 33 of 35 patients with another blood cancer, multiple myeloma, reached some degree of remission within two months.

Too few people have been studied so far to know how long such responses will last. A recent review reported up to half of leukemia and lymphoma patients may relapse.

There are long-term survivors. Doug Olson in 2010 received the University of Pennsylvania's CAR-T version for leukemia. The researchers were frank — it had worked in mice but they didn't know what would happen to him.

"Sitting here almost seven years later, I can tell you it works," Olson, now 70, told a recent meeting of the Leukemia and Lymphoma Society.

Bannick, the Hutch patient treated in 2014, recalls Maloney calling him "the miracle man." He had some lingering side effects that required blood-boosting infusions but says CAR-T is "giving me a second life."

"The more side effects you have, that sort of tells everybody it's working," said Shefveland, who was hospitalized soon after his treatment at Hutch when his blood pressure collapsed. His last clear memory for days: "I was having a conversation with a nurse and all of a sudden it was gibberish."

Treatment is a balancing act to control those symptoms without shutting down the cancer attack.

Experienced cancer centers have learned to expect and watch for these problems. "And, most importantly, we've learned how to treat them," said Dr. Len Lichtenfeld of the American Cancer Society, who is watching CAR-T's development.

CAR-Ts cause collateral damage, killing some healthy white blood cells, called B cells, along with cancerous ones because both harbor the same marker. Finding the right target to kill solid tumors but not healthy organ tissue will be even more complicated.

CARs aren't the only approach. Researchers also are trying to target markers inside tumor cells rather than on the surface, or even gene mutations that don't form in healthy tissue.

"It's ironic that the very mutations that cause the cancer are very likely to be the Achilles heel," NCI's Rosenberg said.

And studies are beginning to test CAR-Ts in combination with older immunotherapy drugs, in hopes of overcoming tumor defenses.

How Will Patients Get It?

If the FDA approves Novartis' or Kite's versions, eligible leukemia and lymphoma patients would be treated at cancer centers experienced with this tricky therapy. Their T cells would be shipped to company factories, engineered, and shipped back. Gradually, more hospitals could offer it.

Because only certain patients would qualify for the first drugs, others would have to search for CAR-T studies to try the treatment. A drug industry report lists 21 CAR-T therapies in development by a dozen companies.

"This is the hope of any cancer patient, that if you stay in the game long enough, the next treatment's going to be just around the corner," said Shefveland, the Hutch patient.

This Associated Press series was produced in partnership with the Howard Hughes Medical Institute's Department of Science Education. The AP is solely responsible for all content