He was at the center of the company's autonomous car lawsuit. 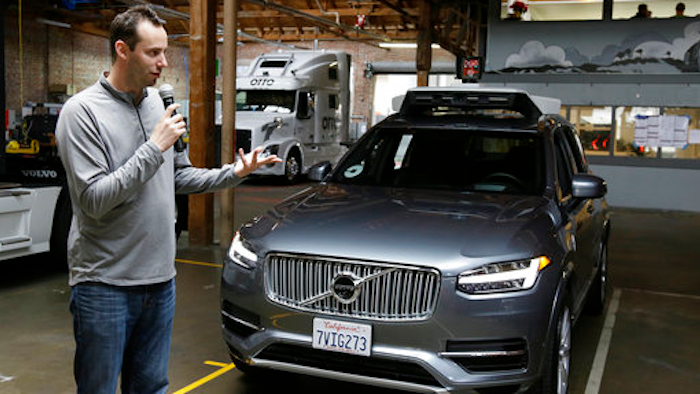 In this Dec. 13, 2016, file photo, Anthony Levandowski, head of Uber's self-driving program, speaks about their driverless car in San Francisco. Uber has followed through on threats to fire Levandowski, a star autonomous car researcher whose hiring touched off a bitter legal fight with Waymo, the former self-driving car arm of Google. Waymo has alleged that Levandowski downloaded 14,000 documents containing trade secrets before he founded a startup that was purchased by Uber.
AP Photo/Eric Risberg, File

DETROIT (AP) — Uber has followed through on threats to fire star autonomous-car researcher Anthony Levandowski, whose hiring touched off a bitter trade-secrets fight with Waymo, the former self-driving car arm of Google.

Waymo has alleged that Levandowski downloaded 14,000 documents containing its trade secrets before he left the company to found a startup that was later purchased by Uber. Earlier this month, U.S. District Judge William Alsup ordered Uber to return the documents and referred the case to the U.S. Attorney's Office in San Francisco for possible criminal investigation.

Uber General Counsel Salle Yoo told Levandowski in a letter filed in court by Levandowski's lawyers that he hasn't complied with Uber's requests to cooperate in obeying the judge's order to return the documents.

"Your failure impeded Uber's internal investigation and defense of the lawsuit," the letter, dated Friday, stated. It said that Levandowski was fired for cause and that he has a contractual right to correct "deficiencies" within 20 days.

A telephone message was left Tuesday afternoon for Levandowski. His lawyers did not immediately respond to a request for comment.

San Francisco-based Uber appears to be blaming the stolen documents solely on Levandowski in an effort to defend itself against Waymo's lawsuit.

The company's letter to Levandowski states that he "represented and warranted" in his employment agreement that he has returned or destroyed all property and confidential information from any previous employer.

On May 19, Uber threatened to fire Levandowski unless he waived his constitutional right against self-incrimination so the ride-hailing service could comply with the court order. Levandowski has asserted his rights under the Fifth Amendment since Waymo filed its lawsuit in February.

In documents posted Tuesday, Levandowski's lawyers said Alsup's order "has thus placed Mr. Levandowski on the horns of an unconstitutional dilemma: either he must waive his Fifth Amendment rights and provide the information and materials specified by the order or face immediate firing."

Levandowski's expertise in robot-controlled cars is the main reason that the ride-hailing company bought his startup for $680 million nine months ago. Uber wants to develop a fleet of self-driving cars so its service eventually won't have to rely on people to pick up passengers. The company is testing autonomous cars with real passengers in Pittsburgh and elsewhere.

Any admission by Levandowski that he possesses Waymo documents could embroil him in even deeper legal trouble. The U.S. Attorney's Office would not comment on any possible investigation.

Uber had been standing by Levandowski's right to use his Fifth Amendment protections until Alsup issued the decision requiring the company to return any documents belonging to Waymo by May 31.

Alsup wrote that "in complying with this order, Uber has no excuse under the Fifth Amendment to pull any punches as to Levandowski."

In a court filing, Levandowski's attorneys argued that it's unconstitutional for a judge to strong-arm an employer into pressuring a worker to give up his Fifth Amendment rights to remain on the job.

"It is an act by the judicial branch of our federal government compelling an individual to choose between preserving his livelihood and preserving his constitutional rights," Levandowski's lawyers wrote.

The case prompted Levandowski in April to temporarily step aside as Uber's top self-driving car executive and avoid working on anything related to lidar, an array of sensors that enables autonomous vehicles to navigate the roads. Alsup ordered Uber to ensure its work on lidar remains off limits to Levandowski.

In a statement on Tuesday, Uber said that Eric Meyhofer, who took charge of autonomous car research when Levandowski stepped aside, will continue to lead the work with Levandowski's subordinates now reporting to Meyhofer.

Is GE's Immelt an Uber Suitor?