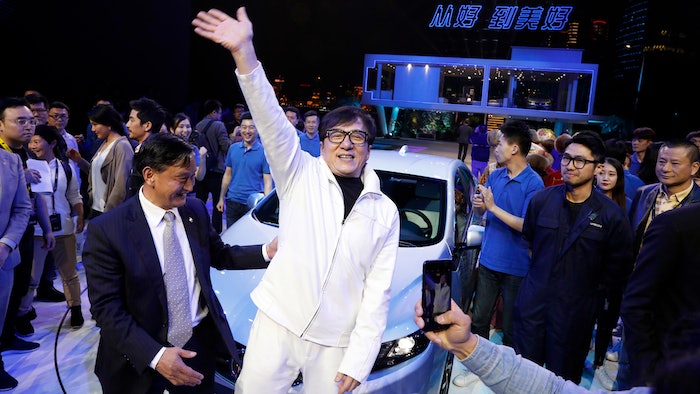 Movie star Jackie Chan attends the global launch of the Buick Velite 5, a extended range electric hybrid ahead of the Shanghai Auto 2017 show in Shanghai, China, Tuesday, April 18, 2017. At the auto show, the global industry's biggest marketing event of the year, almost every global and Chinese auto brand is showing at least one electric concept vehicle, if not a market-ready model.
AP Photo/Ng Han Guan

SHANGHAI (AP) — General Motors Co. plans to make and sell a gasoline-electric hybrid version of its Chevrolet Volt in China, as Beijing presses global automakers to promote alternatives to gasoline.

GM's announcement Wednesday during the Shanghai auto show adds to a wave of global auto giants that are launching electric models in China, the biggest auto market. The government has the world's most aggressive goals for electric vehicles, which it sees as a way to clean up smog-choked cities and take an early lead in an emerging technology industry.

Ford Motor Co., Volkswagen AG and other global brands also have announced plans this year to launch electric or gasoline-electric hybrids in China, where the market is dominated by lower-cost Chinese brands led by BYD Auto, the world's biggest seller of electric models by units sold.

"It's clear that China wants to take a leading role globally in terms of the regulatory environment and electrification," said David Schoch, Ford's president for the Asia-Pacific.

Almost every global and Chinese auto brand is displaying at least one electric concept vehicle, if not a market-ready model. They range from family-friendly SUVs to futuristic-looking, premium-priced electric muscle cars from Chinese startups such as NextEV and Qiantu.

In most displays they were flanked by up to a dozen SUVs able to carry as many as seven passengers. South Korea's Kia Motors Co. debuted an SUV-inspired crossover, the K2 Cross, designed for the Chinese market.

GM said its Velite 5 hybrid will be sold not as a Chevrolet but by its Buick unit, which has modest sales elsewhere but is GM's main brand in China. The vehicle will be made by GM's joint venture with a state-owned automaker, Shanghai Automotive Industries Corp. Prices start at 265,800 yuan ($38,600).

Buick also sells a hybrid version of its LaCrosse sedan in China.

On Tuesday, Volkwagen AG announced plans to launch a pure-electric car in China next year with a state-owned partner. The head of VW's China unit, Jochem Heizmann, said it would be the first in a range of pure-electric vehicles for China.

Ford announced plans earlier to manufacture a hybrid sedan, the Mondeo Energi, with a state-owned Chinese partner, Chang'an Automobile Co. It is due to go on sale next year.

Regulators have jolted the industry with a proposal to require electrics to account for at least 8 percent of each brand's production by next year, rising to 10 percent in 2019 and 12 percent in 2020. Automakers say they may be unable to meet those targets and regulators have suggested they might be reduced or postponed.

The government also is spending heavily to increase the appeal of electrics by expanding China's network of charging stations to reduce "range anxiety," or buyers' fear of running out of power. The Cabinet's planning agency has said it hopes to have 100,000 public charging stations and 800,000 private stations operating by the end of this year.

Electric cars are exempt from sales tax and quotas on license plates ssued in Beijing, Shanghai and other cities to curb congestion and smog. Despite that, sales of electric and gasoline-electric hybrids fell 4.4 percent from a year earlier in the first quarter to 55,929 vehicles while SUV purchases rose 21 percent to 2.4 million.

As manufacturing volume of batteries — an electric car's most expensive component — expands, the cost should fall, making them competitive with combustion engines, Schoch said.

"That will create a market pull rather than the government forcing action," he said.

The status of manufacturing electric cars in China is unclear for foreign brands, which must have joint ventures with state-owned Chinese partners that assemble their vehicles.

Previous rules required foreign automakers to hand over key technology to a Chinese partner or pay import taxes even on models produced in China. Foreign companies balked at giving away expensive know-how that might help a potential competitor to develop.

Regulators have eased some regulations to encourage foreign companies to play a bigger role in developing the Chinese industry but manufacturers say they are waiting to see the final requirements.

To cooperate in product development, Ford has transferred battery technology and software to its joint venture with Chang'an, Worthington said.

"There's a legal framework, but our view is that there is a business framework that probably for us is even more important," he said. "So we are working our way through that. Everything could change tomorrow. You've just got to be flexible.