"We know they didn't warn the hospital about serious problems with the robot and that resulted in mistakes in surgery," said the lawyer for the plaintiff in the lawsuit against Intuitive Surgical Inc.

SEATTLE (AP) — The Washington Supreme Court ruled Thursday that a lower court erred when it didn't tell a jury the maker of a surgical robot had a duty to warn the hospital about its products.

The 6-3 majority vacated a Kitsap County jury's verdict and ordered a new trial in the case of Fred Taylor.

The Bremerton man sued Intuitive Surgical Inc., maker of the surgical robot that was used in his botched operation at Harrison Medical Center in 2008. His wife proceeded with the lawsuit following his death in 2012 at age 67. His family also sued the doctor and hospital and settled for undisclosed amounts.

The jury ruled in favor of the manufacturer, whose surgical robot called the "da Vinci system" is used in laparoscopic surgeries. Jurors found the company was not negligent in providing warnings or instruction to Dr. Scott Bildsten, who performed the surgery.

Intuitive Surgical argued that since it warned the doctor who performed the surgery, it had no duty to warn any other party.

The majority of justices disagreed. Writing for the majority, Justice Susan Owens wrote that the trial court erred by failing to instruct the jury that warnings to the doctor didn't excuse the company's duty to warn the hospital that purchased the devices.

In a dissenting opinion, three justices agreed that the manufacturer owed a duty to the hospital but said Taylor's estate cannot recover an alleged breach of duty owed to another.

In an emailed statement, Intuitive Surgical said Thursday that the court "fails to note in its ruling that Intuitive Surgical presented evidence at trial showing that, consistent with our usual practice, we delivered the hospital's da Vinci System with the user manual, which includes warnings and precautions about the device."

"We know they didn't warn the hospital about serious problems with the robot and that resulted in mistakes in surgery," he said, adding that "the real dangers that they needed to warn about are not contained in the (user) manual." 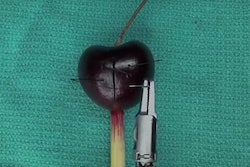