These companies are vying to become the first to develop a commercially viable flying car. 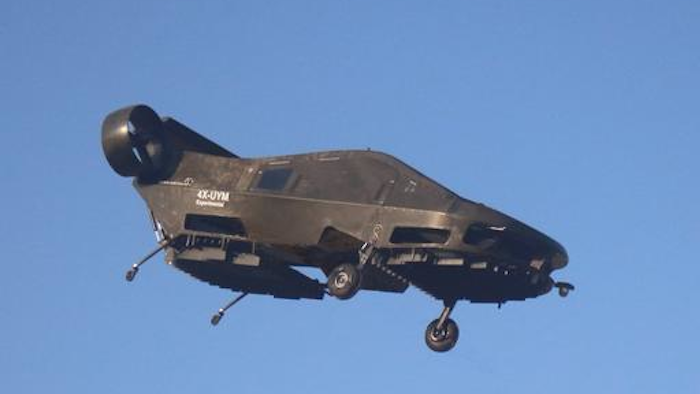 Spurred by technology advances and demand for transportation alternatives in increasingly congested cities, entrepreneurs around the globe are vying to become the first to develop a commercially viable "flying car." The designs vary greatly, and most aren't actually cars capable of driving on roads. Here are some examples:

European aircraft manufacturer Airbus is working at its Silicon Valley research center on a driverless flying taxi that at first will have a pilot, but will later be autonomous. The vertical takeoff-landing, all-electric aircraft is a cockpit mounted on a sled and flanked by propellers in front and back. Airbus plans to test a prototype before the end of 2017, and to have the first Vahanas ready for production by 2020.

Israeli tech firm Urban Aeronautics originally designed its people-carrying drone as an "air mule" for military use. It takes off vertically and has a standard helicopter engine, but no large main rotor. Its lift comes from two fans buried inside the fuselage. Two smaller ducted "fans" mounted in the rear provide forward movement. It can fly between buildings and below power lines, attain speeds up to 115 mph, stay aloft for an hour and carry up to 1,100 pounds

German technology company Lilium Aviation is working on a two-seater aircraft that will take off vertically using 36 electric fan engines arrayed along its wings. The aircraft will hover and climb until the fans are turned backward slowly. After that, it flies forward like a plane using electric jet engines. The company has been flight-testing small scale models. The aircraft will have an estimated cruising speed of up to 190 mph and a range of 190 miles.

The Slovakian company AeroMobil has developed a car with wings that unfold for flight. It uses regular gasoline and fits into standard parking spaces. It can also take off from airports or "any grass strip or paved surface just a few hundred meters long," according to the company's website. Driver and pilot licenses will be required.

Chinese drone maker EHang has been flight-testing a person-carrying drone in Nevada. The vehicle is a cockpit with four arms equipped with rotors. Takeoff and landing targets are pre-programmed. A command station in China will be able to monitor and control the aircraft anywhere in the world, company officials say.

Joby Aviation of Santa Cruz, California is developing a two-seat, all-electric plane with 12 tilt rotors arrayed along its wings and tail. The aircraft takes off and lands vertically and can achieve speeds up to 200 mph, according to the company's website.

Terrafugia, based in Woburn, Massachusetts, began working a decade ago on a car folding wings that can fly or be driven on roads that's called the Transition. The company says it plans to begin production of the Transition in 2019. Terrafugia is also working on a "flying car" called the TF-X — a car with folding arms and rotors for vertical takeoff and landing.

This two-seater, electric multicopter from German company e-volo has 18-rotors and looks like a cross between a helicopter and a drone. It is controlled from the ground, eliminating the need for a pilot license.

This Mountain View, California, aircraft developer bankrolled by Google co-founder Larry Page says on its webpage that it is working on a "revolutionary new form of transportation" at the "intersection of aerodynamics, advanced manufacturing and electric propulsion." Company officials declined to provide details about Zee's projects.