Understanding the sense of touch and learning how to convey them through robotic arms and other machines is central to DARPA’s quest to create advanced prosthetic limbs for wounded Service members and unlock new capabilities. 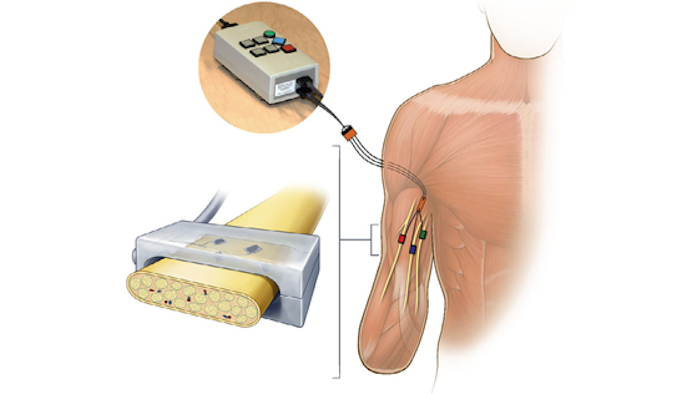 In the HAPTIX system, when pressure sensors on a prosthetic hand worn by a volunteer are engaged, they send signals to a stimulator outside of the volunteer’s body.
DARPA

Pressure—the physical quantity of an experience of touch—is a fundamental dimension of human perception, conveying to the brain not just that the skin is in contact with something, but also how intense the contact is.

That awareness is what enables people to, for instance, gently but securely handle an egg without squeezing so hard that the shell cracks.

Understanding pressure and other aspects of the sense of touch and learning how to convey them through robotic arms and other machines is central to DARPA’s quest to create advanced prosthetic limbs for wounded Service members and unlock new capabilities for other applications of human-machine systems.

Now, a research team funded by DARPA’s Hand Proprioception and Touch Interfaces (HAPTIX) program and including researchers from Case Western Reserve University, the Louis R. Stokes Cleveland VA Medical Center, and the University of Chicago has advanced toward that goal, reporting in the journal Science Translational Medicine the discovery of how to encode graded sensations of pressure in the nervous system using electrical stimulation.

“DARPA is working to evoke naturalistic sensations of touch and motion in users of advanced prostheses by stimulating peripheral nerves,” said Doug Weber, the HAPTIX Program Manager. “Determining how the nervous system encodes the different aspects of touch is an enormous challenge, but with that knowledge we can engineer more capable neural interfaces that could redefine how people interact with tools and machines.”

With the help of two volunteers, both of whom have upper-limb amputations and who have had surgically implanted nerve interfaces in their residual upper-arm stumps for more than two years, the researchers conducted tests to discern how the amplitude and frequency of electrical stimulation of nerves are interpreted by the brain as touch pressure.

In the HAPTIX system, when pressure sensors on a prosthetic hand worn by a volunteer are engaged, they send signals to a stimulator outside of the volunteer’s body.

The stimulator then sends electrical pulses to electrodes that wrap around the major nerve bundles in the stump of the volunteer’s arm—the same nerve bundles that controlled the volunteer’s hand before amputation. The patterned stimulation is carried through the nerves to the brain, which interprets those patterns to discern different levels of intensity.

The research team found that by modulating the number of nerve fibers stimulated (stimulation amplitude) and the frequency of stimulation, sensory information could be transmitted through the peripheral nervous system to the brain such that volunteers could distinguish distinct levels of tactile intensity.

By decoupling stimulation amplitude and frequency and varying one at a time, the researchers could predict the degree of pressure perceived.

The researchers tested a volunteer’s ability to discern tactile intensity in three ways: distinguishing how small of a difference in stimulation he could detect as different pressure levels; rating the intensity of different signals; and comparing and matching the intensity of sensation experienced through the prosthetic hand with measured pressure placed on his intact hand.

During the last test, the researchers found that the volunteers could each reliably correlate the sensation of pressure via the prosthetic with actual pressure on their intact hands. The tests showed the users can discern 20 distinct levels of intensity that were interpreted by the volunteers as degrees of pressure.

DARPA-funded researchers have previously enabled motor control of robotic limbs using brain-machine interfaces connected to the central and peripheral nervous systems. And earlier this month DARPA announced that a team on its Revolutionizing Prosthetics program was able to convey touch sensation from a robotic arm to a volunteer’s brain via a direct neural interface.

That research complements an earlier demonstration under the HAPTIX program that used a less invasive interface between a prosthetic arm and the peripheral nervous system to deliver touch stimulus. In all those cases, however, users had limited ability to know how much pressure was being applied to their mechanical digits, or how much pressure they were applying to held objects.

This latest achievement from the HAPTIX program sheds new light on the neural mechanisms behind the quantitation of tactile sensation and could support more realistic neural interfaces for a multitude of applications.

May 25th, 2017
Latest in Product Development