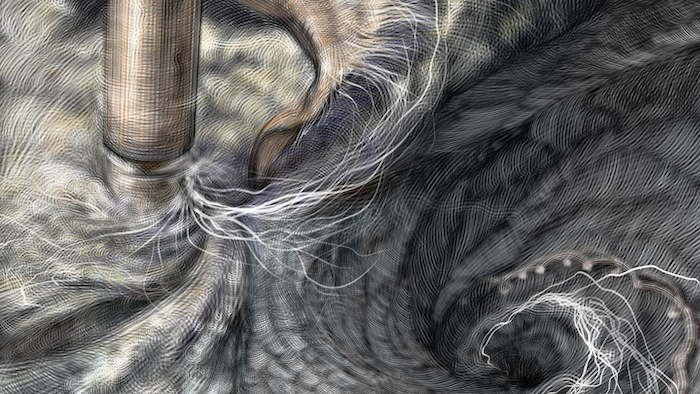 Harvard researchers have developed a new method to make and collect nanofibers and control their size and morphology. This could lead to stronger, more durable bulletproof vests and armor and more robust cellular scaffolding for tissue repair.
Michael Rosnach

CAMBRIDGE, MASS. -- Fibrous materials -- known for their toughness, durability and pliability -- are used in everything from bulletproof vests to tires, filtration systems and cellular scaffolds for tissue engineering and regenerative medicine.

The properties of these materials are such that the smaller the fibers are, the stronger and tougher they become. But making certain fibers very small has been an engineering challenge.

Now, researchers from the Harvard John A. Paulson School of Engineering and Applied Sciences (SEAS) and the Wyss Institute for Biologically Inspired Engineering at Harvard have developed a new method to make and collect nanofibers and control their size and morphology. This could lead to stronger, more durable bulletproof vests and armor and more robust cellular scaffolding for tissue repair.

The research is published in Macromolecular Materials and Engineering.

Nanofibers are smaller than one micrometer in diameter. Most nanofiber production platforms rely on dissolving polymers in a solution, which then evaporates as the fiber forms.

Rotary Jet-Spinning (RJS), the technique developed by Kit Parker's Disease Biophysics Group, works likes a cotton candy machine. Parker is Tarr Family Professor of Bioengineering and Applied Physics at SEAS and a Core Member of the Wyss Institute. A liquid polymer solution is loaded into a reservoir and pushed out through a tiny opening by centrifugal force as the device spins. As the solution leaves the reservoir, the solvent evaporates and the polymers solidify and elongate into small, thin fibers.

"This advance is important because it allows us to manufacture ballistic protection that is much lighter, more flexible and more functional than what is available today," said Parker, who in addition to his Harvard role is a lieutenant colonel in the United States Army Reserve and was motivated by his own combat experiences in Afghanistan. "Not only could it save lives but for the warfighter, it also could help reduce the repetitive injury motions that soldiers, sailors, marines and airmen have suffered over the last 15 years of the war on terror."

"Rotary Jet-Spinning is great for most polymer fibers you want to make," said Grant Gonzalez, a graduate student at SEAS and first author of the paper. "However, some fibers require a solvent that doesn't evaporate easily. Para-aramid, the polymer used in Kevlar® for example, is dissolved in sulfuric acid, which doesn't evaporate off. The solution just splashes against the walls of the device without forming fibers."

Other methods, such as electrospinning, which uses an electric field to pull the polymer into a thin fiber, also have poor results with Kevlar and other polymers such as alginate used for tissue scaffolding and DNA.

The Harvard team overcame these challenges by developing a wet-spinning platform, which uses the same principles as the RJS system but relies on precipitation rather than evaporation to separate the solvent from the polymer.

In this system, called immersion Rotary Jet-Spinning (iRJS), when the polymer solution shoots out of the reservoir, it first passes through an area of open air, where the polymers elongate and the chains align. Then the solution hits a liquid bath that removes the solvent and precipitates the polymers to form solid fibers. Since the bath is also spinning -- like water in a salad spinner -- the nanofibers follow the stream of the vortex and wrap around a rotating collector at the base of the device.

Using this system, the team produced Nylon, DNA, alginate and ballistic resistant para-aramid nanofibers. The team could tune the fiber's diameter by changing the solution concentration, the rotational speed and the distance the polymer traveled from the reservoir to the bath.

"By being able to modulate fiber strength, we can create a cellular scaffold that can mimic skeleton muscle and native tissues," said Gonzalez. "This platform could enable us to create a wound dressing out of alginate material or seed and mature cells on scaffolding for tissue engineering."

Because the fibers were collected by a spinning vortex, the system also produced well-aligned sheets of nanofibers, which is important for scaffolding and ballistic resistant materials.