It's not going to happen immediately — automakers and tech companies are still testing prototypes. 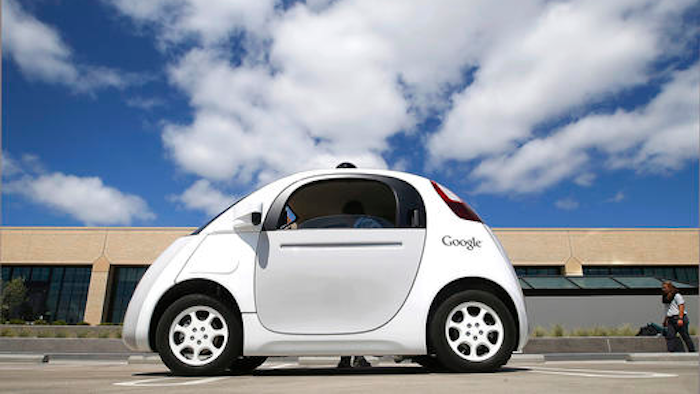 California regulators have changed course and opened a pathway for the public to get self-driving cars of the future that lack a steering wheel or pedals.

It's not going to happen immediately — automakers and tech companies are still testing prototypes.

But, in a shift, the state's Department of Motor Vehicles said in a revision of draft regulations released late Friday that the most advanced self-driving cars would no longer be required to have a licensed driver if federal officials deem them safe enough.

The redrafted regulations will be the subject of a public hearing Oct. 19 in Sacramento.

The DMV has been wrestling for several years with how to oversee the emerging technology.

In December, the agency released an initial draft of self-driving car regulations that required a licensed driver in any self-driving vehicle. The industry reacted with great disappointment, as the ultimate vision of many companies is a car that has no wheel or pedals. That approach is based on the argument that humans are not very good at driving, and anyway cannot be relied on as a backup to a car that typically drives itself but might fail in a way that required a person in the driver's seat who might be distracted or even asleep to snap to attention.

The DMV's new document coincides with the release last week of a 112-page federal proposal under which any self-driving car should pass a 15-point safety assessment before the public can get ahold of it.

Among other things, the safety assessment asks automakers to document how the car detects and avoids objects and pedestrians, how hardened it is against cyberattacks and what how its backup systems will cope should the software fail. In incorporating the federal approach, California dropped a proposal that a third-party company certify the safety of self-driving cars.

The new draft regulations released Friday include several other new provisions. Among them is wording that would prohibit advertising vehicles with lower levels of automation — such as Tesla Motors' Autopilot, which on divided highways can keep a car's lane, brake and accelerate on the understanding that a person is paying attention all the time — from being advertised as "autonomous" or "self-driving."

The company that stands to gain the most from the state's embrace of cars without a wheel or pedals is Alphabet, where the Google self-driving car project envisions cars that allow no human control other than a start and emergency stop button. A spokesman for the Google self-driving car project did not have a comment Friday on the changes to the proposed regulations.

The Impact of Automation on Long-Haul Trucking