The artificial coral will be made of sandstone and limestone. 3D printers allow for more natural looking and complex structures than using concrete and traditional molding methods. 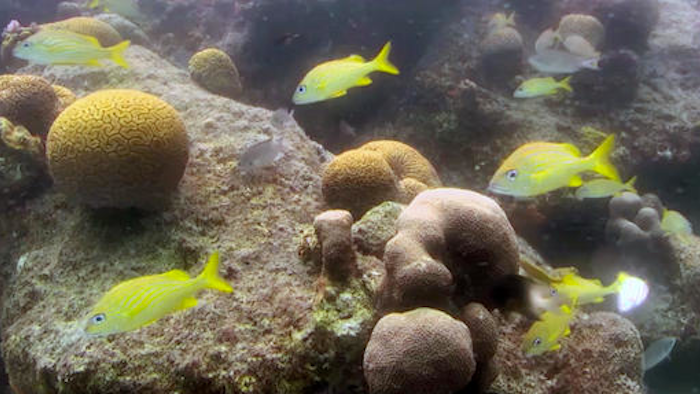 This undated screen grab of a video by the Harbour Village Beach Club and released by the Fabian Cousteau Ocean Learning Center, shows fish in the Caribbean Sea near the western shore of Bonaire. Underwater cameras are tracking reefs off Bonaire as part of a project that will include the use of 3D printers to create extremely realistic artificial reef habitat that backers hope will foster natural habitat development in damaged reefs elsewhere in the world.
Fabian Cousteau Ocean Learning Center via AP

KRALENDIJK, Bonaire (AP) — Vast coral reefs surrounding this island are considered by many experts to be the healthiest and best-protected in the Caribbean, and that makes Bonaire an ideal spot to test whether 3D printing technology can help preserve these vital marine habitats around the world.

A partnership that includes the foundation of ocean explorer Fabien Cousteau will be using the rapidly developing layered printing technology to design structures that are virtually identical to the ornate natural coral formations that have long made the southern Caribbean island a top diving destination. They hope their artificial creations will foster natural growth of the reef faster than other methods.

"Essentially we will be able to print rock in quotations," Cousteau said.

The artificial coral will be made of sandstone and limestone and will be deployed just offshore from the Harbour Village Beach Club, a Bonaire resort that is active in conservation efforts and is a partner with Cousteau's Ocean Learning Center in the project.

Reef-building coral is a tiny polyp-like animal that builds a calcium-carbonate shell around itself and survives in a symbiotic relationship with certain types of algae. Its reefs serve as vital spawning and feeding grounds for numerous marine creatures. It comes in some 1,500 known species, ranging from soft, undulating fans to those with hard skeletons that form reef bases.

The partners will monitor the progress of the artificial structures with underwater cameras already in place, capturing images of the vibrant reefs that are a feature of the Bonaire National Marine Park.

The Bonaire park is already host to experiments in re-growing coral in nurseries and extensive research. The island, about 50 miles north of Venezuela, is one of the bright spots for reefs in the Caribbean, where the iconic reefs have been devastated by the effects of pollution, development and climate change.

"There are many places in the world now where reefs when I was a teenager were a fireworks display of life and now they are basically a desert, overgrown with algae and devoid of animals," said Cousteau, a grandson of renowned oceanographer Jacques Cousteau. "It's a sad statement because about 70 percent of the biodiversity in the ocean depends on coral reefs."

Park spokeswoman Anouschka van de Ven said the park has issued a permit for the cameras but not yet for the 3D-project, which is scheduled to start this fall.

The technique has been tried off Bahrain in conjunction with other forms of artificial reef in the Persian Gulf. The 3D printer allows for more natural looking and complex structures than using concrete and traditional molding methods. Cousteau and others hope the technology will lead to more natural formations and greater biodiversity.

"Coral reefs are an essential part of the underwater web of life," he said. "They are the rainforest if you will of water, of life under water, including about 70 percent of species which live and thrive or depend on coral reefs at some point within the life cycle."