His cooperation is a major breakthrough in the Justice Department's probe into the scandal. 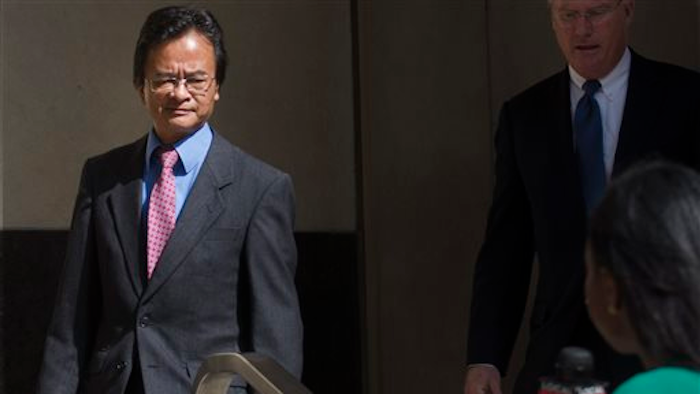 DETROIT (AP) — A Volkswagen engineer has pleaded guilty to one count of conspiracy in the company's emissions cheating scandal, advancing a criminal investigation by agreeing to testify against others.

James Robert Liang, 62, of Newbury Park, California, entered the plea Friday in U.S. District Court in Detroit to one count of conspiracy to defraud the government through wire fraud.

Liang is the first person to enter a plea in the case, and his cooperation is a major breakthrough in the Justice Department's probe into the scandal. Government documents say others were involved and point to multiple emails in German that likely came from VW employees in Wolfsburg, Germany.

Volkswagen has admitted to installing software on about 500,000 2-liter diesel engines in VW and Audi models in the U.S. that turned pollution controls on during government tests and turned them off while on the road. The Environmental Protection Agency found that the cars emitted up to 40 times the legal limit for nitrogen oxide, which can cause human respiratory problems.

Liang, who began work for VW in 1983 in Germany, and also worked in the U.S., was indicted in June on one count of conspiracy to commit wire fraud and another count of violating the Clean Air Act. According to a plea agreement unsealed Friday, Liang admitted that he and others planned software known as a defeat device, that could cheat U.S. emissions tests after recognizing that a diesel engine they were designing could not meet customer expectations and stricter emissions standards. Using the defeat device enabled VW to obtain a certificate from the Environmental Protection Agency needed to sell the cars in the U.S.

Liang pleaded guilty to the conspiracy charge before Judge Sean Cox. He will be sentenced on Jan. 11. The judge said that guidelines call for Liang to serve five years in prison. He also could be fined up to $250,000.

Volkswagen wouldn't comment on the plea but said Friday that it continues to cooperate in the investigation.

Laing, who wore a dark suit and tie, mostly responded "yes" or "no" to the judge's questions at the Friday hearing, but also read a brief statement in which he admitted to the fraud. He had a German-speaking interpreter with him in court but did not use her and gave all responses in English. The judge noted that he is not a U.S. citizen and could be subject to immigration action.

Assistant U.S. Attorney Mark Chutkow told the judge that two or more of Laing's colleagues also had knowledge of the conspiracy.

According to the indictment, Liang and his co-conspirators were tasked with designing new diesel engines for the U.S. market that complied with stricter emissions standards for nitrogen oxide emissions that went into effect in 2007. Within VW, it was referred to as the US '07 project.

Prosecutors say Liang and the other engineers realized that could not design a diesel vehicle that both met the stricter U.S. emission standards and performed well enough to satisfy customers. So they began work on defeat device software that would cheat on the tests, the indictment says.

Within VW, the cheating software was referred to as "cycle beating," or "emissions tight" mode, among other terms, according to the indictment.

In one 2007 meeting with government officials in Ann Arbor, Michigan, Liang participated as his co-conspirators misrepresented that VW's diesel vehicles complied with U.S. emissions standards, according to the plea agreement.

"Liang knew that VW was cheating by implementing the defeat device and that he and his co-conspirators were considering deceiving EPA in this meeting," the plea agreement states.

The indictment says that in May 2008 Liang transferred from Volkswagen headquarters in Germany to the U.S. to help oversee the launch of the new "clean diesel" models. Investigators uncovered internal company emails that show Liang and other VW engineers exchanged ideas about how to "effectively calibrate the defeat device" so that the cars would recognize when they were undergoing U.S. emissions testing. The software was designed to recognize when the cars were being tested on a treadmill-like device called a dynamometer.

In 2013, Liang and others exchanged messages in German about software that recognized when the engine was revving but the steering wheel was not moving, an indication that the car was undergoing a dynamometer test. The software then calibrated the engine to run cleaner than it would in real world driving, according to the indictment.

"If this goes through without problems, the function is probably truly watertight! ;-)" one of the VW employees messaged Liang in German.

The scheme began to unravel in 2014 when a nonprofit group discovered that the cars polluted too much in real-world driving conditions. But prosecutors say that Liang and his VW colleagues still conspired to hide the existence of the defeat devices.

As a first step, VW offered a new "optimized" software update that was supposed to address the high emissions.

"We 'only just need a plausible explanation' as to why the emissions are still high!!!" a VW employee wrote to Liang and others in German after the software patch provided by VW failed to fix the problem.

"We must be sure to prevent the authority from testing the Gen 1!" a VW employee emailed in June 2015, referring to the first generation of VW models using the "clean diesel" engines. The emails said that if Gen 1 is tested by the California Air Resources Board "then we'll have nothing more to laugh about!!!!!"

As the VW engineers struggled to explain to U.S. regulators why their cars kept failing the tests, a VW employee wrote Liang and others in July 2015: "the key word 'creativity' would be helpful here."